The National Aeronautics and Space Administration (NASA) in partnership with the Canadian Space Agency (CSA), Roscosmos (Russia), the Japan Aerospace Exploration Agency (JAXA) and the European Space Agency (ESA) participate jointly in the International Space Station (ISS), a research laboratory that orbits the Earth. Canadian space robotics, including Canadarm2 and Dextre, were used to assemble the Station and now help to keep it running.

Before astronauts can embark on a mission aboard the ISS, they usually undergo intensive preparation,  including training on operating the Canadarm2,which occurs in part at CSA’s Robotics Training Centre, located in Saint-Hubert, Quebec.

One can imagine how rigorous the training schedules are for astronauts planning trips to the ISS in “normal” times, but in the midst of a global pandemic, when national borders are closed and drastic health measures are being taken, already strained training schedules become considerably more complicated. As such, CSA and NASA worked closely with the Ministère de la Santé et des Services sociaux du Québec and Global Affairs Canada and coordinated with the Public Health Agency of Canada and the Canada Border Services Agency to develop a plan that would permit Colonel Chari the necessary exemptions in order complete his training in Canada In addition to his pre-trip Covid-19 tests, Colonel Chari self-monitored for symptoms prior to travel, while in transit, and throughout his stay in Canada.  He successfully completed his specialised training without any issues.

During this two-month-long pre-trip planning process, Canadian astronaut David Saint-Jacques, who is also a medical doctor, worked on the detailed mitigation plan that ensured all needed measures were taken prior to and during the training. Partner agencies frequently commented that this was perhaps the most detailed and the best mitigation plan that they had ever seen!

Operating Canadarm2 is among the most delicate activities of a mission onboard the Space Station. The astronauts must be able to carry out two essential tasks: catch and dock unmanned capsules containing supplies and manipulate Canadarm2 in order to move astronauts on spacewalks. 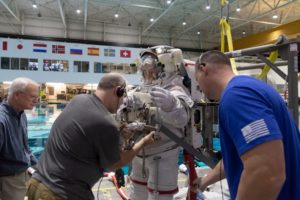 ‘The robotics training that NASA astronauts receive is a crucial part of what we need to keep the space station operating. Earlier in the station program, it was needed to help assemble the station itself. Now that we are celebrating the 20th anniversary of continuous human presence aboard the space station, Canadarm2 is even more important as it is what keeps us going. We need the robotic arm to capture the vehicles that bring up cargo, experiments, and spare parts. Additionally, we are often using robotic components to perform maintenance activities at the station. Although spacewalking is exciting to watch, it also is extremely risky for the astronaut and the station. Over the years we’ve been able to use Canadarm2 to do all kinds of work that would have otherwise required a person. That has saved many days of spacewalks and months of planning and setup that would have otherwise been needed.

The work between NASA and CSA has been rewarding for both agencies and sets a great stage for future work on exploration and the Artemis program. The International Space Station’s Canadarm2 is required to support long duration missions, and many of the lessons learned are being actively applied to the next generation robotic arm systems being developed for the lunar gateway. With a blend of both proven hardware and operations experience plus new technology and computing methods, I’m excited to see how the current system evolves to meet the needs of humans as we head to the Moon to stay and Mars after that.’

Thankfully, astronauts can count on the CSA’s robotics training centre for training. They start by learning the theory behind how the robots work and how to operate them safely, using tools like scale models, interactive whiteboards that can display multiple camera angles, and simulation software. After learning theory concepts in class, astronauts put them into practice at a robotics workstation that is a replica of the one on the Station. It is installed in a ¾-scale model of the Destiny laboratory.

The robotics workstation includes a laptop with two hand controllers to adjust Canadarm2’s side-to-side and rotational movements and three screens displaying video from Canadarm2 and other exterior cameras.

These features help make astronauts more familiar with the visual and computer-based tools available to them on the Station. Astronauts who complete this phase continue the rest of their training in Houston, where they practise robotics operations specific to their missions.

Congratulations to the newly certified Canadarm2 operator and to the whole team that made this happen! 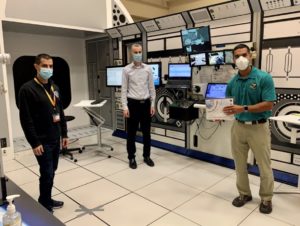