Canada is a fully committed partner, working with the U.S. to promote peace and security around the world.

Canada has fought alongside the U.S. in defence of our common values through World Wars I and II, the Cold War, Korea, Balkans, the Middle East, and Afghanistan. In fact, Canadian Army, Navy, and Air Force officers are embedded throughout the U.S. military at all levels – protecting and defending our shared continent in search and rescue operations, the interdiction of illegal narcotics, providing humanitarian assistance and supporting disaster relief missions.

For over sixty years, members of Canadian and American armed forces have jointly defended North America at the bi-national North American Aerospace Defence Command (NORAD). Throughout its history, NORAD has stood ready to respond to threats from intercontinental ballistic missiles; terrorism; and other air, missile, and space attacks.  We are also founding members of the North Atlantic Treaty Organization (NATO), contributing to international peace, security, and stability for nearly seventy-five years.

Canadian troops ensure that Canada is strong at home, secure in North America, and engaged in the world. Canada continues to increase its capability to support global operations, including peace support operations. With ongoing investments in space, cyberspace, intelligence, R&D, as well as force modernization, Canada continues to innovate.

What’s more, the Canadian Armed Forces (CAF) is active throughout Eastern and Central Europe, and is leading NATO’s multinational battlegroup in Latvia. Together with our NATO Allies, we deploy our ships and sailors on a rotational basis to NATO’s Standing Naval Forces in support of NATO’s assurance and deterrence measures. Through NATO’s Air Policing efforts, our aviators protect Allied airspace. Canada’s military also supports contributions in the Middle East, as part of the NATO mission in Iraq, mentoring security forces, by conducting air operations and assisting with regional capacity-building. In the Indo-Pacific region, ships from the Royal Canadian Navy and aircraft from the Royal Canadian Air Force regularly operate with the U.S. to enhance our defence and security relationships and enforce UN Security Council sanctions against North Korea. 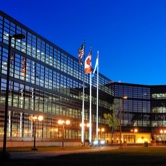 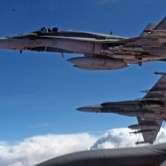 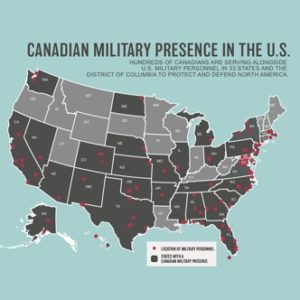 Canadian Military Presence In the U.S.

Canada and the U.S. work together around the world to safeguard global peace and security, and promote shared prosperity. We are responding to humanitarian crises and bringing innovative approaches to international development. Critically, with Canada’s Feminist International Assistance Policy, and the U.S. Women’s Global Development Partnership, our emphasis on the empowerment of women and girls remains a core shared value. Our public and private sectors are collaborating to facilitate economic growth, including by promoting trade in the developing world to diversify economies. We both continue to be among the largest donors helping fragile and post-conflict states with humanitarian assistance and economic development. We are dedicating resources to lift populations out of poverty and provide protection to the most vulnerable with innovative solutions to international humanitarian challenges. 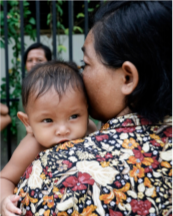