Canada is the number one market for the U.S.

The United States and Canada share a trillion dollar trade and investment relationship. This economic partnership between the U.S. and Canada supports millions of jobs in both countries through direct foreign investment, cross-border trade, and our integrated economies. Canada buys more from the U.S. than any other country by a wide margin. Moreover, Canada buys more from the U.S. than the United Kingdom, Japan, and Germany combined.

Nearly half of the goods the U.S. buys from Canada are raw materials used by American manufacturers, contributing to jobs in the U.S. and to North American competitiveness. Similarly, our companies buy from U.S. sources to make Canadian products.

No industry better depicts the relationship between Canada and the U.S. than the automotive industry, with its highly integrated supply chains resulting in nearly $110 billion in bilateral trade. Factories in both countries specialize in specific components of manufacturing a vehicle. By the time a car rolls off an assembly line, some materials/components have crossed the Canada-U.S. border multiple times during the production process.

Canada buys more from the U.S. than the United Kingdom, Japan, and Germany combined.

In agriculture too, sophisticated cross-border supply chains exist for many of the products Canadians and Americans buy in their grocery stores or restaurants. For example, the lettuce on a hamburger may be from one country, the tomato another, and the beef and bun may even be from both. These high-quality and safe food products are feeding American families.

Find out about Canada’s relationship and importance to your state by checking out the State Trade Fact Sheets. This collection highlights the importance of Canada’s trade relationship with all 50 states. Each fact sheet features success stories from local businesses and corporations. 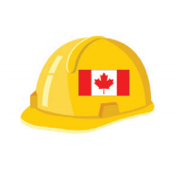 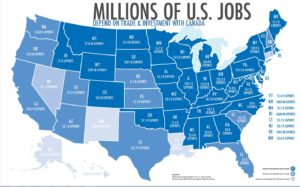 Millions of U.S. Jobs Depend on Trade & Investment with Canada

Canada and the U.S. work together on a number of trade policy issues, including modernizing our trading rules and ensuring they remain free and fair.

After 25 years, the United States, Mexico, and Canada are modernizing the North American Free Trade Agreement (NAFTA) to bring it into the 21st Century. The new agreement – United States-Mexico-Canada Agreement (USMCA) – will build on NAFTA’s successes and will continue to support millions of well-paying, middle class jobs. It will maintain free trade in North America, while helping ensure the benefits are more widely shared. 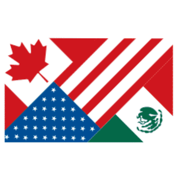 A Win-Win-Win For 21st-Century Trade 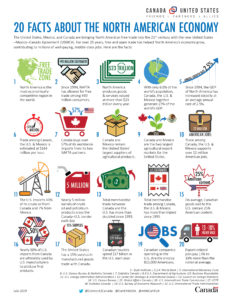 20 Facts about the North American Economy

Buy America
Domestic content requirements, like Buy America, jeopardize our economic partnership. Because U.S. manufacturing relies heavily on raw materials and other products from Canada, many companies consider these “domestic.” In the steel industry for example, many workers on both sides of the border even share the same union. However, Buy America provisions deter job growth and investment; stifle innovation; and create red tape for contracting authorities. Our relationship works best when our markets are free and fair. 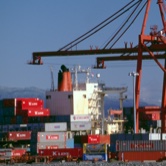 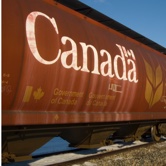 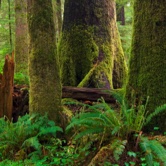 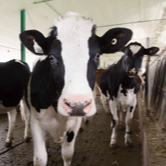 Straight From The Cow’s Mouth: The Facts On Dairy 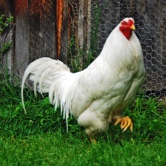 Why Did The Chicken Cross The Road? To Get To Canada’s Fair & Open Poultry Market

The Canadian market is ideal for U.S. companies looking to grow their business. According to the World Bank, Canada is the easiest place in the G7 and OECD to start a business. Canada has a stable business climate, low taxes and business costs, highly educated and skilled workforce, generous research and development incentives, and preferential access to global markets. In fact, Canada is a global leader in many of these areas.

Canada has the most highly educated and diverse talent pool in the world. Nearly two-thirds of working Canadians have a post-secondary education, the highest availability of skilled labor in the G20. To ensure companies can attract top global talent quickly with minimal red-tape, Canada launched the Global Skills Strategy in 2017. This strategy will contribute to Canadian innovation and will support Canadian jobs.

Canada’s federal tax systems is one of the most competitive in the world. The corporate tax rate is only 15% and the combined federal-provincial corporate rate is roughly 26%, below most G7 countries. Canada incentivizes research and development, offering tax credits worth $15-32 CAD for every $100 CAD spent. In addition, American subsidiaries in Canada can immediately write-off the cost of machinery and equipment used to manufacture or process goods. Canada also allows businesses of all sizes to write-off a share of their costs in the year an investment is made under the new Accelerated Investment Incentive.

With 14 free trade agreements covering 51 markets, including with every G7 member, Canada is a gateway to 1.2 billion consumers and over half of global GDP ($41 trillion). Canada has preferential access to the entire North American market, with a combined GDP of over $20 trillion and over 480 million consumers. Canada’s trade agreement with the European Union gives businesses duty-free access on 99% of Canadian goods to an additional 500 million consumers and GDP of $17 trillion. Recent ratification of the Comprehensive and Progressive Agreement for Trans-Pacific Partnership expanded Canada’s preferred market access to over 1.5 billion consumers and $51 trillion in GDP, nearly two-thirds of the world output of goods and services. These agreements create secure and stable trade environments for Canadian businesses and lower administrative burdens.