Did you know Canada was the third country in space? In fact, since 1962, Canada and the U.S. have partnered to explore our universe. NASA Astronaut, and dual U.S.-Canadian citizen, Andrew Feustel is a living example of this cooperation. He has clocked 226 days in space, and came by the Embassy to talk about his most recent trip to the International Space Station. While he shared some tips for living in space – you have to exercise for 2.5 hours a day! – he also talked about the achievements of his Canadian colleagues and ways they have worked together both big (operating the Canadarm) and small (eating some chocolates from Peace by Chocolate). 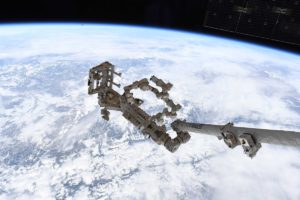 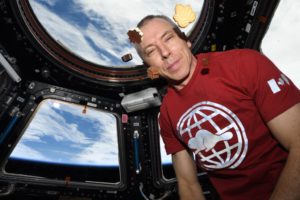 Our commercial space industries are also collaborating. Many U.S. companies entering the commercial space market rely on Canadian suppliers and expertise. This was made clear in late April when Doug George, Canada’s Acting Consul General in Dallas spoke at the Mid-America Aerospace and Defense Summit in Fort Smith, Arkansas. The conference, sponsored by the Arkansas Aerospace Alliance, brought together U.S. government officials from the U.S. and Canada, our private sectors, and academics to talk about greater international cooperation in our aerospace industries. 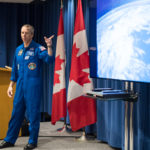 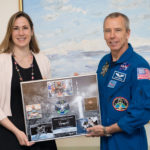 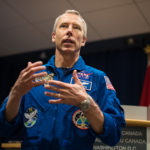 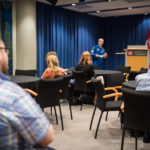 NASA astronaut Drew Feustel speaks about his experience on two shuttle missions, STS-125 and STS-134, as well as Expeditions 55 and 56 on the International Space Station, at the Embassy of Canada, Monday, May 6, 2019 in Washington. Photo Credit: (NASA/Aubrey Gemignani)