COVID-19 Across the Border: Teaming Up on Treatments, Trials and Tracking – Not to Mention Vaccines

Since the outbreak of COVID-19, those in the scientific and medical communities on both sides of the border have been working tirelessly in responding to the virus. Many have turned their focus to starting various clinical trials, tracking the disease, developing treatments, and, of course, to testing for a possible vaccine. The examples below show how Canadian and US companies, scientists and governments are combining forces in the fight against COVID-19.

Near the early stages of the outbreak, Vancouver-based AbCellera received a blood sample from one of the first US patients to recover from COVID-19. The company, which develops therapeutic antibodies, screened over 5 million immune cells from the sample, looking for ones that produced functional antibodies that helped the patient neutralize the virus and recover from the disease. Their findings identified over 500 unique fully human antibody sequences. The research led to the signing of an agreement in March with US pharmaceutical company Eli Lilly for the continuing development of an antibody treatment based on their findings, given Eli Lilly’s expertise in  rapid development, manufacturing and distribution.

As we learn more about the virus, researchers are increasingly looking at how existing medications could be used to treat patients. One cross-border research collaboration, currently underway in New York City, involves a clinical trial of the anti-inflammatory medication Colchicine to treat complications arising from COVID-19. Clinician-researchers at New York University’s Langone Center and the Montreal Heart Institute Research Centre are hopeful that Colchicine will prevent immune systems from overreacting and creating an “inflammatory storm” in some patients. The trial is funded by the Government of Quebec, Quebec-based companies Pharmascience and CGI, and NYU Langone Health.

Gilead Science, based in the San Francisco area, led a clinical trial of an experimental drug, Remdesivir, to assess its effectiveness as a COVID-19 anti-viral treatment.  Results, announced at the end of April, showed that the drug shortened the time it takes for patients to recover by four days on average — from 15 days to 11, and also showed a trend toward fewer deaths. Gilead has a manufacturing facility in Edmonton and operations in Mississauga, both of which are likely to be involved in any future production and distribution of Remdesivir.

Toronto-based BlueDot, whose mission is to ‘protect people around the world from infectious diseases’, has developed an algorithm, powered by artificial intelligence, which searches 24 hours a day through huge amounts of information, such as media reports, livestock bulletins, and anonymous cellphone data, for mentions of 150 deadly pathogens. On New Years Eve, the algorithm sent an alert based on a report from a Chinese business paper of the outbreak of 27 cases of a ‘mysterious flu-like disease’ in Wuhan. It was one of the very first organizations to detect and track what would become COVID-19. It is now working with states such as California to provide real-time mapping data on health and mobility trends, allowing officials to better allocate resources for hospitals and assess the effectiveness of stay-at-home orders.

VBI Vaccines Inc., a biopharmaceutical company based in Boston, is collaborating with Canada’s National Research Council (NRC) to develop a candidate for a vaccine that would provide immunity for not only COVID-19, but also SARS and the Middle East respiratory syndrome (MERS). Work will be conducted in Ottawa, at both VBI and NRC facilities. Researchers will begin by evaluating and selecting an optimal vaccine candidate, and then move to move to creating materials for the necessary clinical studies of the candidate, which are likely to be available at the end of 2020. 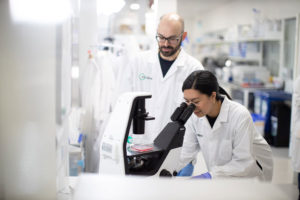 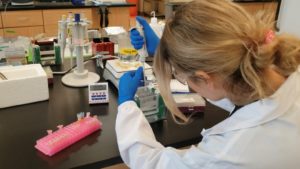 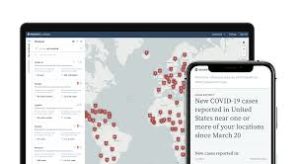