Chef Laetitia Chrapchynski, Chef de Cuisine at the Embassy of Canada in Washington, D.C, recently participated in a Canada-U.S. Culinary Diplomacy event with the Southern Alberta Institute of Technology to explore Canadian products and Indigenous culture. In this two-part series, she shares some of her reflections. If you missed Part 1 in the series, you can read it here.

The next day, preparations for the reception continued in the kitchen. Guests included local Calgary chefs, restauranteurs, suppliers, farmers, SAIT faculty, as well as staff from Global Affairs Canada. Chef Rosalyn Ediger opened the reception, alongside the Dean of SAIT, with an intro into the concept of culinary diplomacy and how it can support students, during and after their schooling. 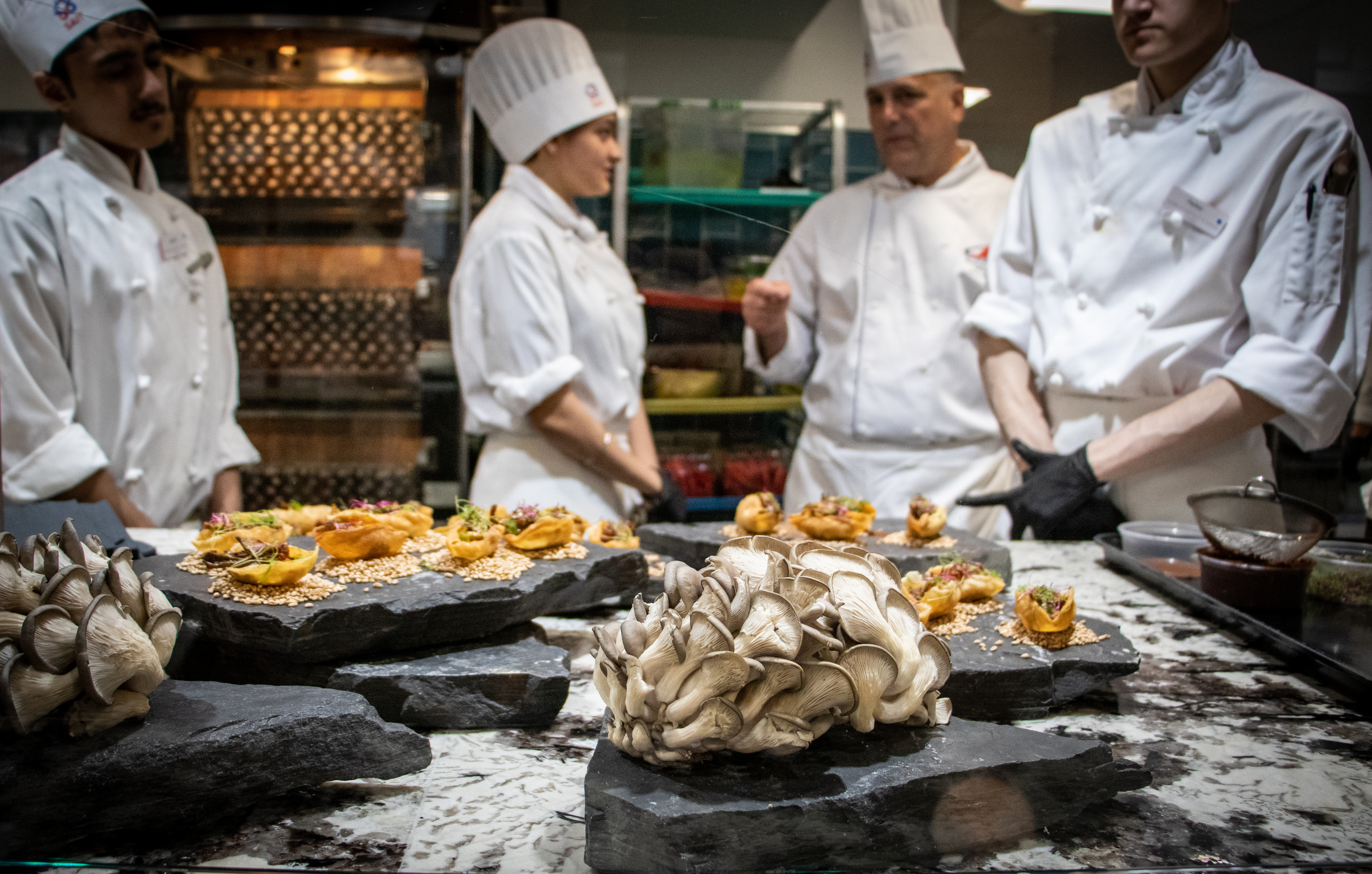 Ceres Solutions mushrooms “on the half shell” during the reception

On our final day, we headed out on a farm-orientated bus excursion. In the darkened mirror of the bus, the Alberta foothills were glistening. The windows rendered the view, mainly of grazing fields for cattle, combined with stretches of canola and mustard. In the near distance, breath taking vistas of the Rocky Mountains were revealed through the clouds. On the road, wildlife was spotted during an occasional crossing. 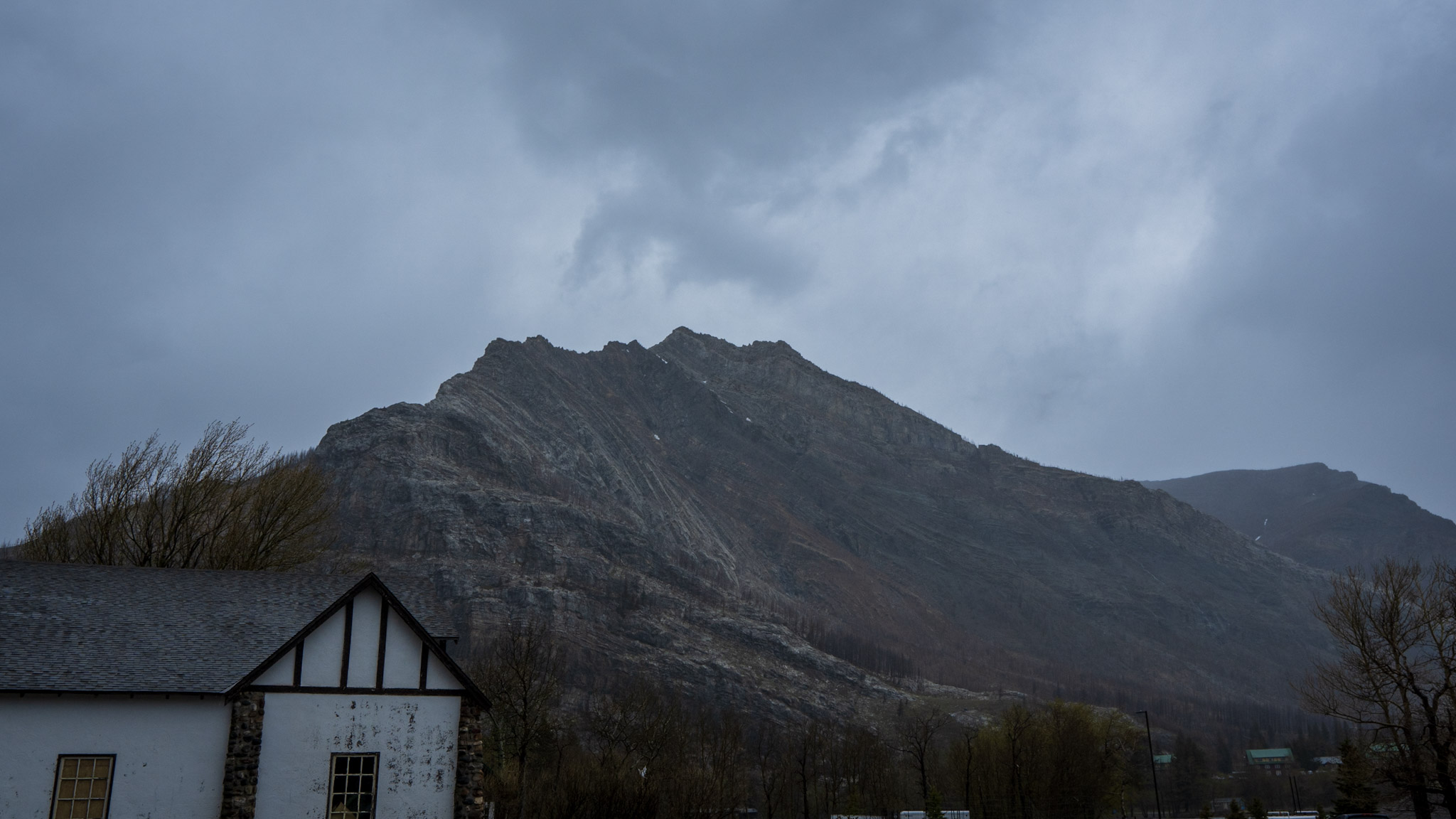 In the sky, the progression from clear morning skies to stormy clouds was visible. Some stretches were good, while others leading to the farms and producers we visited, were rocky and potholed. The ruralness of our surroundings as we approached our destination gave the trip a special feel, particularly to a group so focused on where food comes from and how it is produced.

Our first stop was to the Chinook Honey Farm, where we were treated to a variety of honey samples. Not only a place to buy raw honey, the farm is also a learning centre where you can witness a live observation hive. They hold a mission statement that is deeply rooted in honey advocacy and education. They have expanded their honey program to include mead, soaps, lotions, and select reading materials.

Next, we visited was Trail End Beef. The beef is produced with grass, water, and time. They manage a carefully selected herd on historical land very closely. The lush grass, fertile soil, and clean water combined with happy, healthy cattle give a rich taste and tenderness to their beef.

Grass-fed beef has terroir, a French term that describes the character unique to place. The owners of the farm chatted about their backgrounds, community involvement, the land, and the variability in weather patterns. 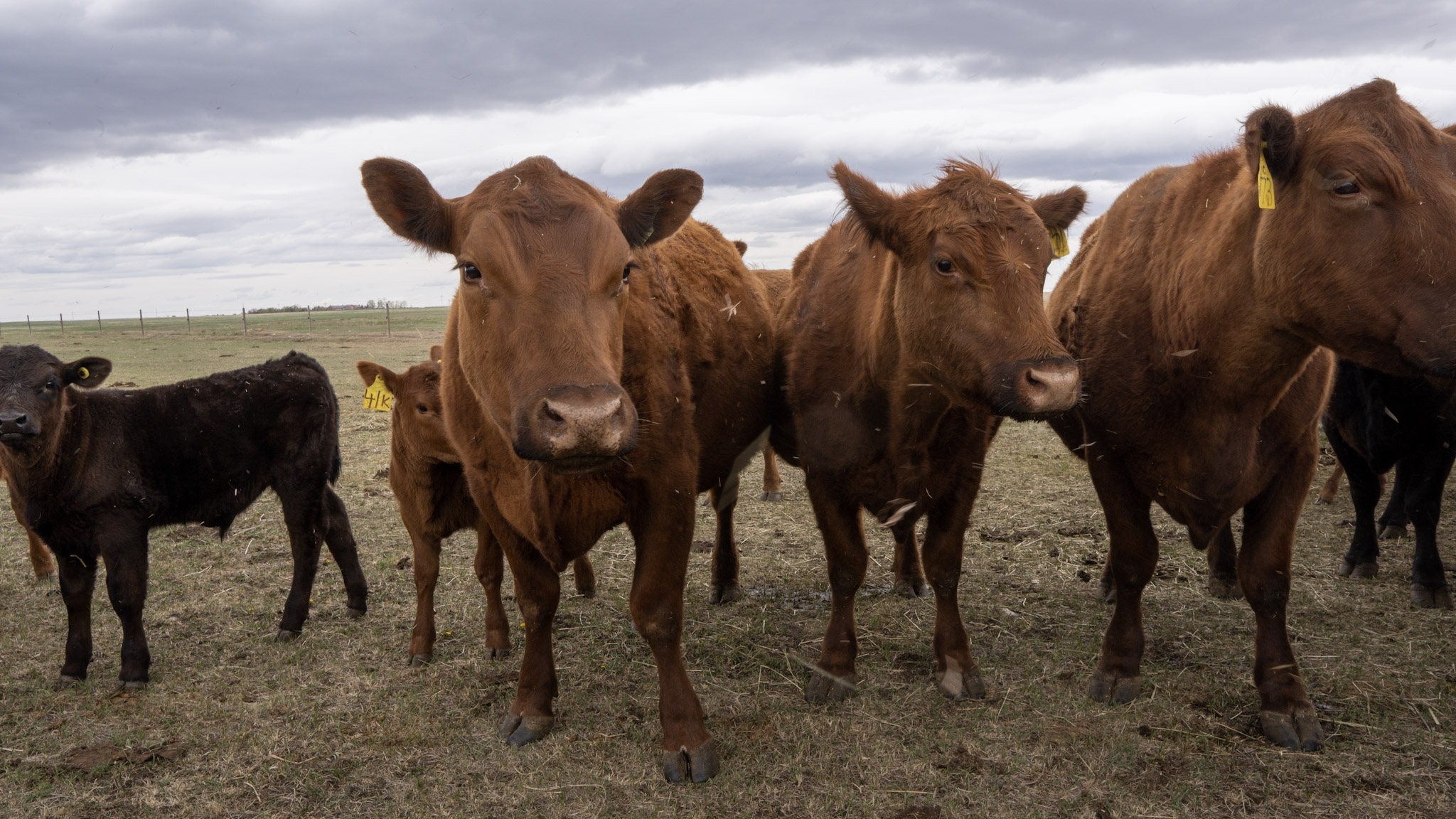 Following our time at Trail End Beef, we stopped at Eau Claire Distillery, in Black Diamond. The “farm to glass” distillery is well known in Alberta for its award-winning gins, whiskeys, and vodkas. Eau Claire is one of the first to source grain according to ‘terroir’. Rather than treat the grain as a commodity, Eau Claire carefully analyzes it to create the unique flavours it is looking for. As a result, their small batch whisky, like a fine wine, will vary slightly from year to year, as the flavour of the grain correlates to the terroir of the farm. 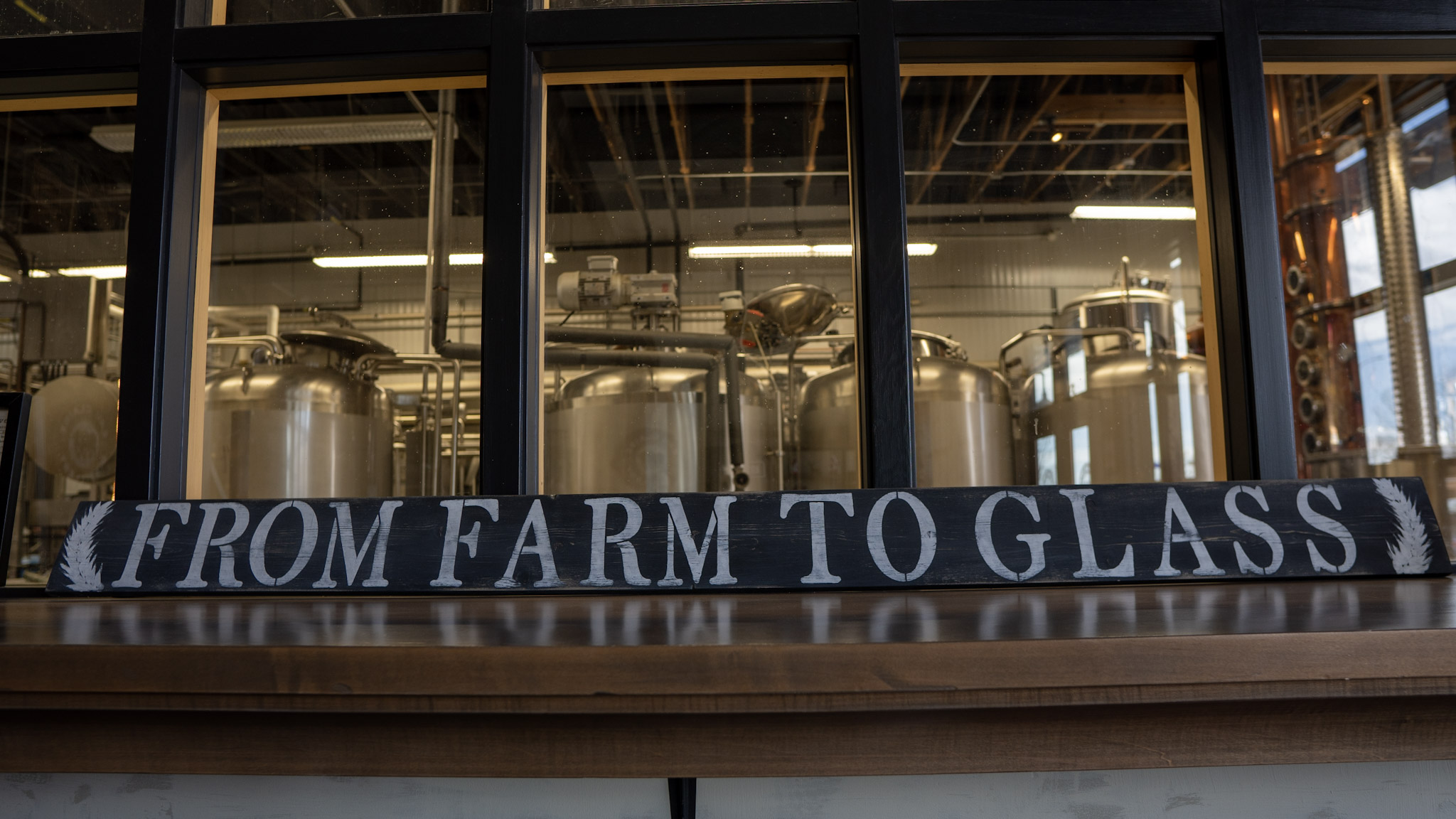 Finally, our last stop was at the Bison Paddock Loop Road, in Waterton National Park. We arrived late in the day and a storm was approaching, but luckily we were able to see the wild bison in their grassland habitat in the distance. Bison helped sustain all Canadians through harsh winters, dust storms, and periods of intense travel. The repopulation of these majestic creatures is a missing piece that shows a path to a more sustainable future and a path towards Indigenous reconciliation. The fields of research in the areas of soil microbiology towards the way in which bison live shows promise for future generations. 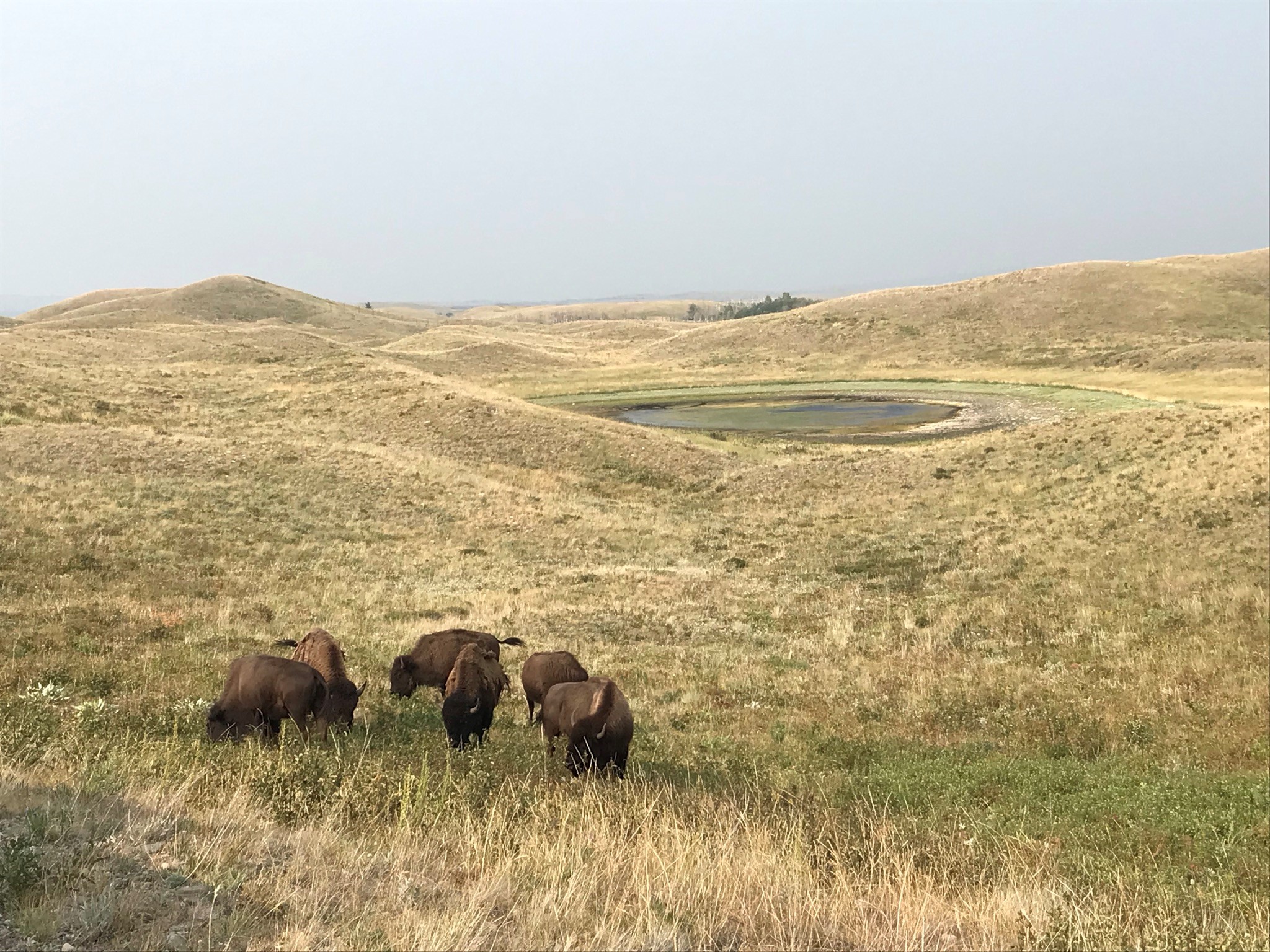 The bison paddock loop when bison are closer

My visit to Alberta was remarkable and am still relishing in the afterglow of it all. Visitors are welcome and Canadians are eager to share the bounty our country has to offer. I see the enthusiasm in the eyes of those I speak to when describing the landscape. I am proud of where I am from and I very feel fortunate that I get to share Canada from a culinary lens.

Food can tell a powerful story. Thank you for allowing me to share some of those stories.