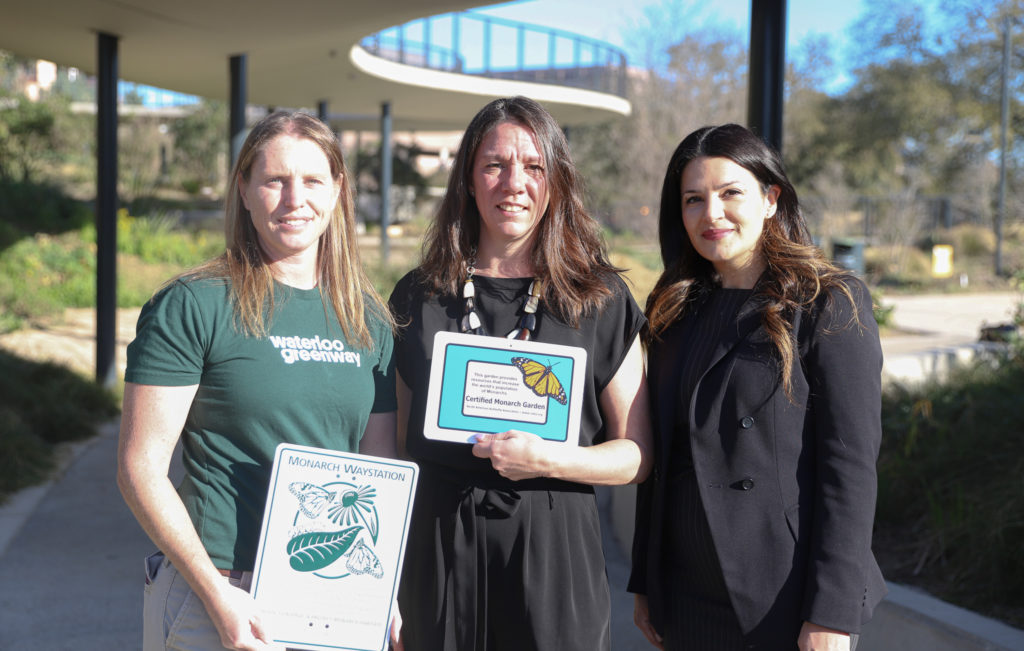 Twice a year, hundreds of thousands of monarch butterflies make a stunning migratory journey across North America. From breeding grounds in southern Canada and the eastern United States to overwintering sites in central Mexico, the annual cycle is considered the longest and most complex migration of any monarch population in the world. Each year, four generations of monarchs set out on this impressive journey.

Unfortunately, however, the monarchs’ migration is under threat. Deforestation and the conversion of grassland into farmland along the migratory path have contributed to the deprivation of vital breeding and resting grounds. The governments of Canada, the United States and Mexico have joined forced to help ensure this unique and spectacular migration can survive.

Recently, in Austin, Texas, the Canadian Consulate General in Dallas supported an initiative to develop part of the Waterloo Greenway into a welcoming rest stop for monarchs. Through collaborative efforts, a pollinator garden was installed in Austin’s “Central Park” – an 11-acre area of the Greenway located a few blocks from the Texas Capitol. The garden is adorned with monarch-friendly native plants, such as Frog Fruits, Kidneywoods as well as Turk’s Caps, and is certified and registered by Monarch Watch, which is a nonprofit organization based at the University of Kansas under the Monarch Waystation Program. Canada’s Consulate General in Dallas was pleased to contribute to this important project to protect pollinators and the migratory path, further underscoring Canada’s trilateral collaboration with the United States and Mexico in protecting monarch butterflies and wildlife.

The monarch butterflies play an important role as pollinators at each stop along their grand migration. Providing and preserving habitats along the migratory path helps to fulfill the butterflies’ role in pollinating plants that are essential to protecting the balance and biodiversity in our ecosystems.

It is no surprise, then, that the monarch butterfly is front-and-center on the logo of the Commission for Environmental Cooperation (CEC), an intergovernmental organization established as part of the North American Agreement on Environmental Cooperation in 1994. The CEC works to support cooperation between Canada, the United States and Mexico to address environmental issues that span the three countries. The pollinator garden at Waterloo Greenway is one of the most recent examples of this 28-year history of collaboration.