Diplomacy in Bloom: In the “Biodiversity without Borders” program, three countries come together to celebrate the North America Friendship Garden in San Antonio 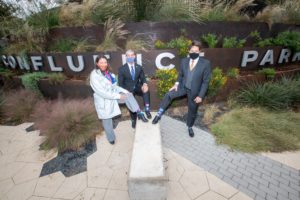 In recent years, matters of environmental conservation have gained traction in the public sector, But Canadian, Mexican, and American representatives proved that the conversation can be just as uplifting as it is critical. In that light, what better time to celebrate collaborative environmental initiatives across borders than during the migration of majestic monarch butterflies?

During the Monarch Butterfly and Pollinator Festival on October 29, 2020 representatives from three countries gathered in San Antonio to discuss the importance of multi-national cooperation in environmental, sustainability, and conservation initiatives. Already a leader in conservation efforts, in particular since it committed to the National Wildlife Federation’s “Mayors’ Monarch Pledge” in 2016, San Antonio solidified its status as a global city by hosting the program “Biodiversity without Borders” around the same time in late October.

Dr. Rachel McCormick, Canadian Consul General to the state of Texas, Dr. Rubén Minutti, Mexican Consul General in San Antonio, and San Antonio Mayor Ron Nirenberg attended the event and contributed to the spirit of international friendship and progress that characterized the occasion. Along with policy experts, they participated in a two-part program focusing on current biodiversity efforts in their respective cities as well as future collaborative projects. Part of this program was a guided discussion on topics such as San Antonio’s history of conservation, the significance of interdependent human existence and its effect on the natural world, and advancing borderless ecology policies at the local level. Mayor Ron Nirenberg spoke about the importance of maintaining a conservation plan, and how helpful it is in regards to both community education and government support towards the environmental restoration agenda.

The highlight of the day was the announcement of the North America Friendship Garden. The San Antonio River Authority announced that the gift from Canada and Mexico, would span approximately 2500 square feet of San Antonio’s Confluence Park. Leaders of the project designed the garden as a destination for people and pollinators alike. Large pollinator plants will stimulate biodiversity, while such attractions as art benches, a seed library, and a “bug hotel” will provide sources of enrichment for students and families. San Antonio already boasts a stated goal of “enhancing green and blue infrastructure, regenerating biodiversity, and protecting natural ecosystem,” especially in regards to its climate action plan, and the garden will be a physical reminder of the city’s commitment to the spirit of conservation and collaboration.

Dr. McCormick expressed the delight of the Government of Canada to be part of such a promising initiative: “Today we are celebrating a new USMCA agreement that includes an environmental chapter, and this garden is a tangible example of our three nations working together, literally from the ground up, to build a better environment for generations to come.”

The sentiment certainly rings true, evoking both the existing friendship between the three nations as well as the commitment to implementing the 2030 Sustainable Development Goals. In the words of Dr. Rubén Minutti, Consul General of Mexico in San Antonio: “The North American Friendship Garden, at the unique Confluence Park, reflects the longstanding, healthy and productive relationship between Canada, the United States and Mexico.”

The announcement of the garden and accompanying discussion succeeded in spreading awareness of international conservation efforts and the importance of collaboration in protecting this world we share. As an added bonus, the monarch butterflies will have yet another incentive to return year after year.