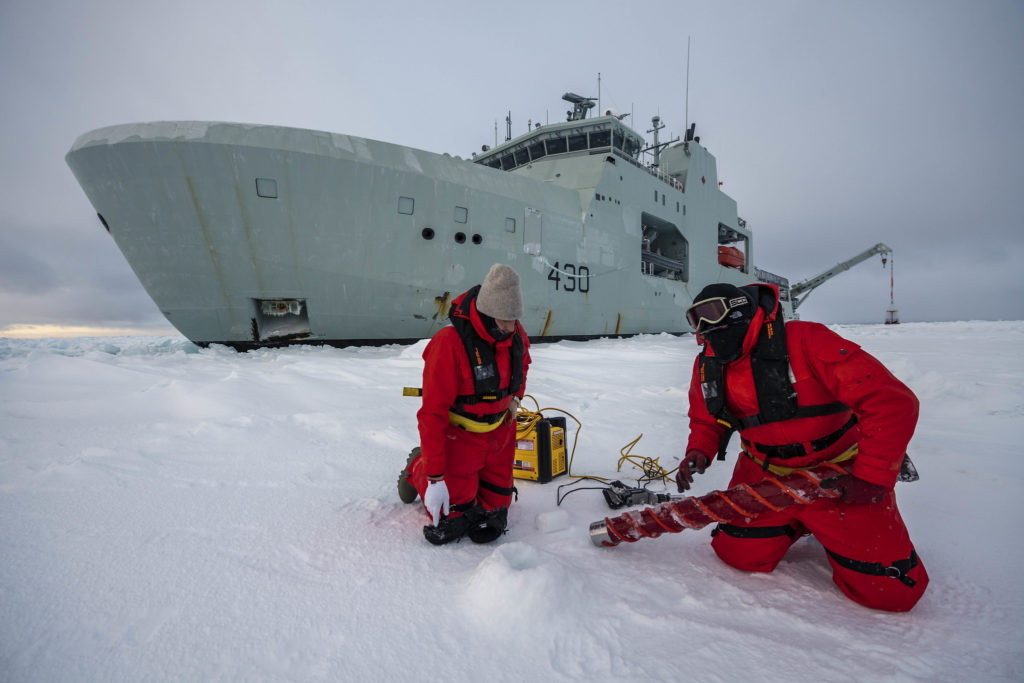 Embassy staff and local members of the Canadian Armed Forces invited their American counterparts to welcome the crew of the newest ship in the Royal Canadian Navy and commend them on a successful trip.

“As part of my job back in Washington, I tell people about the unique and long-standing Canada-U.S. defence relationship,” said Major-General Ormsby. “It’s always a pleasure to get to visit with those who work every day to strengthen the bond between our nations.”

The first of Canada’s fleet of Arctic and Offshore Patrol Ships, the ship circumnavigated North America, participating in Operations Nanook in the Arctic and Caribbe in the Eastern Pacific and the Carribean Sea. The crew worked with members of the U.S. Coast Guard along the way.

“From Halifax through the Northwest Passage, to patrolling the Pacific and Caribbean, HMCS Harry DeWolf carries a message from Canada,” said Deputy Ambassador Loken. “It’s a message that we will stand up for tolerance, for kindness and honour, that Canadians stand guard, at home and around the world, in the name of peace.”

While on patrol in the Pacific Ocean in November, the crew and an attached U.S. Coast Guard Law Enforcement Detachment disrupted illicit drug trafficking routes, seized more than 5,700 lbs of cocaine and retrieved evidence linking the smugglers to a transnational criminal organization.

“The crew of this ship, Canada’s newest, and the Coasties they worked with, are ambassadors of cooperation and working together for the greater good,” said Major-General Ormsby.

HMCS Harry DeWolf is named in honour of a Second World War Canadian naval hero. A native of Bedford, N.S., Vice-Admiral Harry DeWolf was decorated for outstanding service throughout his naval career, which included wartime command of HMCS St. Laurent from 1939-40, and HMCS Haida from 1943-44. After the war, he served as Principal Military Advisor to the Canadian Ambassador to the United States.

“Like him, this ship is versatile, built to operate in our ever-changing Arctic, along our vast coastline, and overseas with our partners,” said Major-General Ormsby. “Like him, this crew is ready for whatever challenges that are on the horizon. I know Vice-Admiral DeWolf would be proud that his name is so well represented alongside our American allies.”

The ship traversed through the fabled Northwest Passage, the first time since 1954 that a Royal Canadian Navy ship followed the route of the Franklin Expedition.  In the North, the ship demonstrated the unique abilities of both its crew and the Arctic and Offshore Patrol Ships. Alongside HMCS Goose Bay and ships from the Canadian Coast Guard and the United States Coast Guard, Harry DeWolf participated in exercises that simulated responses to a major maritime incident.

“We will continue, among other things, to work together on search and rescue support and emergency management capacity in our Northern regions,” said Loken. “Holding regular exercises between our respective Coast Guards, Navies, Air Forces and Armies in an Arctic environment remain a priority, and vessels like HCMS Harry DeWolf play an important role in such cooperation.”