Canada and the U.S. Working Together to Keep North America Safe

As 2021 comes to a close and we take stock of the Canada-U.S. relationship, we are reminded that our friendship, partnership, and alliance remain grounded in the people to people connections and our shared experiences.  We have each other’s backs in the darkest of times.  We listen and have frank conversations about complicated issues, always with the goal of taking the best care of Canadians and Americans while building a better world for all. And we are acutely aware that the world is watching how we are take care of our North American neighborhood and how we treat each other as global leaders.

In the long list of peacekeeping operations identified by the United Nations and the North Atlantic Treaty Organization (NATO), Canadians and Americans, as distinguished allies, are there to help war-torn countries be stable and self sufficient.   On the other side of the globe, Canada and the United States work strategically in the region toward our mutual goal of a Free and Open Indo Pacific.  Our militaries, who have fought together as far back as World War I, are today also helping communities rebuild after massive floods, tornadoes and devastating forest fires.  A military uniform is also one of the many helping hands extended to Afghan refugees who have seen their lives uprooted by war and who seek safety in communities across Canada and the United States.

Closer to home, on military bases across North America and worldwide, our men and women in uniform are embedded in each other’s commands.  We share the same mandate.  In Colorado Springs, Canadians and Americans are one as North American Aerospace Defence Command (NORAD) – watching, warning and protecting against attacks.  No matter the shift, Royal Canadian and United States Air Force personnel are on duty.

Every year, our governments, academics, and business leaders gather in Nova Scotia for the Halifax International Security Forum to discuss threats to our democracies, both external and home-grown.  At this year’s Forum, Ambassador Hillman and members of Congress carved out time to re-focus on the Canada-U.S. partnership.  We are working together and around the world, to help the devastating effects of the pandemic.  The reality is that we depend on each other for so much – and we are stronger when we work together.

As Arctic neighbours, Canada and the United States work closely on search and rescue, disaster preparedness and response, safety and security, scientific research and environmental protection, while addressing challenges impacting Indigenous peoples and Northerners such as climate change. Through the expanded Canada-U.S. Arctic Dialogue, our two countries have the opportunity to discuss these shared priorities in the Arctic, and to identify areas for enhanced cooperation.

In Nova Scotia’s shipyards, next generation Arctic and Offshore Patrol Ships are being built.  The HMCS Harry DeWolf and its 68-member crew trained and sailed from Halifax through the Northwest Passage to Vancouver, British Columbia with a final stop this month in Norfolk, Virginia.  The ship is versatile — from icebreaking and search and rescue, to law enforcement and drug interdiction, often in collaboration with our American partners such as the U.S. Coast Guard.

This past summer, Canada invoked the Arctic Cooperation Agreement to authorize the U.S. Coast Guard icebreaker Healy to navigate in the waters of the Canadian Arctic Archipelago. Canada also authorized the Healy to undertake Marine Scientific Research in waters under Canadian jurisdiction and sovereignty, including the Northwest Passage. The cooperative presence of the Healy in Canadian waters was evidenced in the organization of a joint Search and Rescue Exercise between the U.S. Coast Guard represented by the Healy and the Canadian Coast Guard, near Resolute, Nunavut.

Everyday, there are hundreds of real life situations where Canadians and Americans are working together and living in an unpredictable world and managing a constantly evolving threat environment.  We have the most integrated defence supply chain in the world – a flow that is critical to our defence industrial base.  Beyond that, no two nations depend more on each other for their mutual security and prosperity.  Conversations between Capitals are the norm.  Canada’s newly named Defense Minister, Anita Anand, spoke this month with U.S. Secretary of Defense Lloyd Austin about our shared agenda, and priority threats at home and abroad — Arctic.  NORAD Modernization.  Ukraine. Russia.

The story of the Canada-U.S. relationship reinvents itself in everyday life – in the automobiles we drive.  In the protective masks we wear.  In battles with forest fires.  On-board military ships. At universities working side-by-side on science.  At businesses that have a zip code and a postal code.  Canadians and Americans with blended families in both countries. There is always a common goal, a connection and a story to tell – 2022 will be no different. 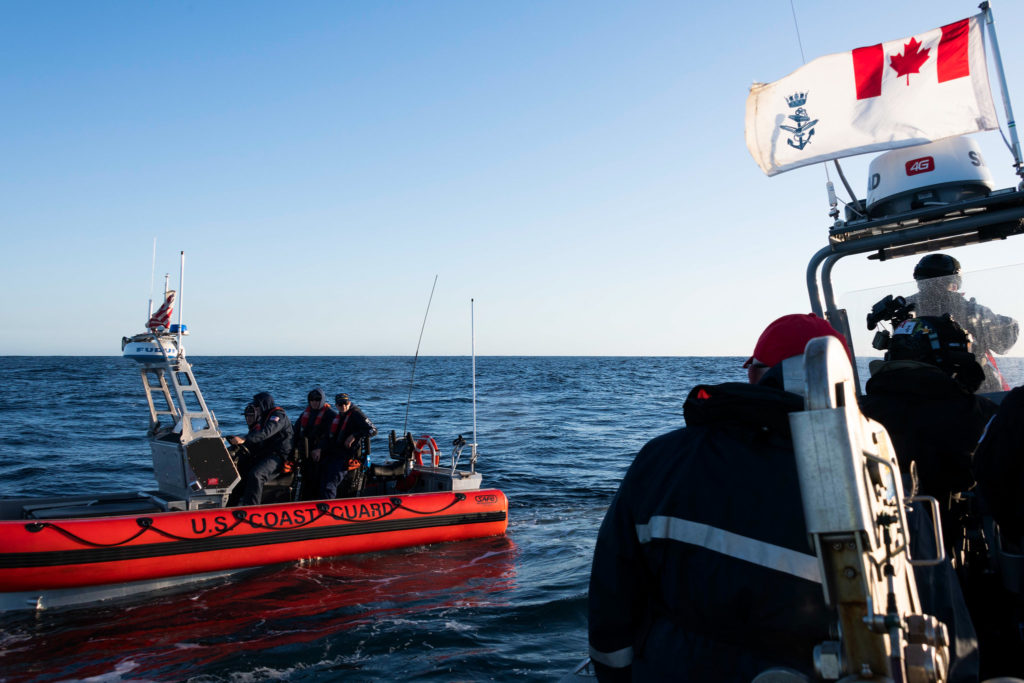