Tree for Boston: A Story of Friendship 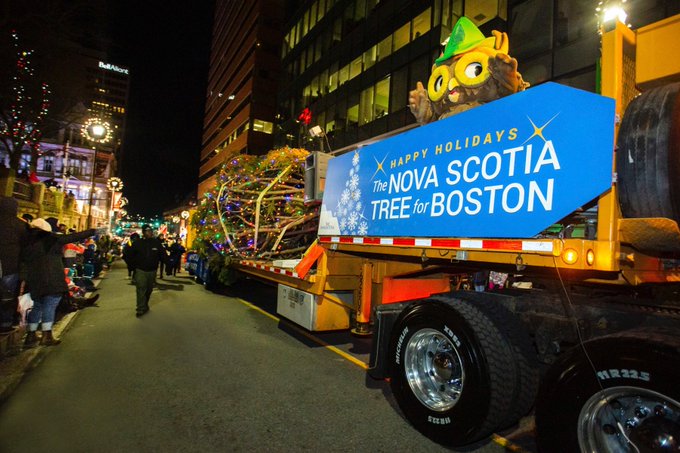 In Boston, the official holiday season kicks off with the Boston Common Tree Lighting on December 5, a tree lighting with special meaning for Canadians in New England and across the United States.

In December 1917, two ships – one laden with explosives – collided in Halifax Harbour, causing a huge explosion that devastated Halifax. Approximately 2000 people were killed and another 9000 were injured. The City of Boston, Massachusetts was one of the first responders to provide aid and medical supplies to Halifax. As a token of gratitude, Halifax gifted a Christmas tree to Boston the next year. Nova Scotia has delivered the official Christmas tree to Boston Common outside the Massachusetts State House annually since 1971, and this year is no different.

The tree in Boston Commons this year, a 45-foot white spruce donated by Desmond Waithe and Corina Saunders, comes all the way from Pictou County in Nova Scotia. The tree lighting ceremony itself reflects the longstanding ties between Boston and Nova Scotia, and includes performances by Massachusetts-native Matt Nathanson, Nova Scotian Neon Dreams, Nova Scotian R&B singer-songwriter Zamani, Dorchester’s Holy Tabernacle Church Choir, and many others.

If you’re in Boston and want to be a part of the festivities, head down to the Boston Commons (139 Tremont Street in Boston) at 6 p.m. ET Can’t make it to the actual lighting but want to watch? Boston’s WCVB will broadcast the tree lighting ceremony live starting at 7 p.m. Of course, you can also follow the Consulate General of Canada in Boston’s social media accounts for updates!

? The @TreeforBoston ? has been picked! Thanks Desmond Waithe & Corina Saunders of Pictou County for your ?. #DYK that every year, #NovaScotia donates a tree to #Boston as a token of gratitude for relief efforts after the #HalifaxExplosion in 1917? #TreeforBoston https://t.co/Mp7MScWNXP