In honour of our veterans, Acting Ambassador Hillman delivered remarks at the Embassy of Canada thanking all those who have served. She was joined by the Canadian Defence Attaché, Major-General Paul Ormsby, and two American WWII veterans, Henry Stawicki and Dr. John Honig. Read the text of her remarks:

American World War II veterans Henry Stawicki and Dr. John Honig, thank you for joining us here today. Henry, you stormed the beaches on D-Day. John, you survived the Holocaust and lived a lifetime of service. We thank you and honour you, today and every day.

We know this ceremony, this moment. We do it every year. At cenotaphs, monuments, and memorials across Canada, we gather to mark the precise instant when the guns fell silent at the end of the First World War. We stand together to silently remember all those we lost in that great conflict and in the conflicts since.

Who do we remember each November?

We think of young men and women in Army, Navy, and Air Force uniforms. We think of them in the greatest conflicts of our times. We picture them pushing for victory at Vimy Ridge. We see them shielding England in the sky during the Battle of Britain, and on the seas in the Battle of the Atlantic.

75 years later, we remember them amongst the 155,000 Allied troops who landed on the beaches on D-Day. We remember their incredible feats that day and in the fighting at Normandy.

Today, I would like us to think about people like Sonya d’Artois of the Special Operations Executive, who at 20 years old parachuted into France to covertly support the Allied invasion and liberation of Paris.

We remember the bravery of the troops in Italy, where they fought in the heat, snow, and mud of the grinding Allied battle across Sicily and up the Italian peninsula. Let us remember Canadian Army Lieutenant Maxine Llewellyn Bredt, who left her home in British Columbia to care for some of the 26,000 Canadian casualties in the Italian Campaign. She wanted to be right in the action.

Canadians rushing to the action. It’s a familiar scene. In the Kapyong Valley during the Korean War and on the streets of Kandahar in Afghanistan, Canadians stood shoulder-to-shoulder with our Allies.

But these people were more than those battles, those conflicts. They were daughters and sons, sisters and brothers, wives and husbands, mothers and fathers.

They were cherished in their Canadian towns – in fishing villages and mining towns, in prairie farms and Inuit communities.

They loved and were loved.

As we remember them fighting in foreign lands, we shall not forget their lives. Men and women who sacrificed everything. The many who returned irrevocably wounded. The many who stand amongst us here today.

We remember the sacrifices of our Allies. American World War II veterans Henry Stawicki and Dr. John Honig, thank you for joining us here today. We will forever thank you for answering the call.

Thank you to those who continue to serve, and for the support of family and friends.

We wear the poppy. And we remember. 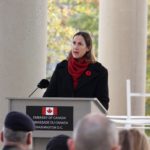 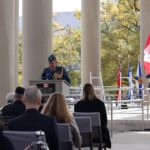 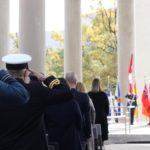 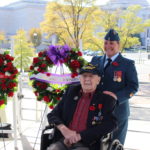 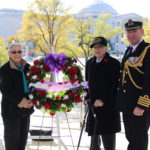