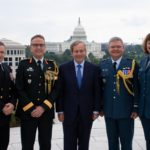 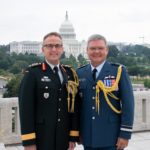 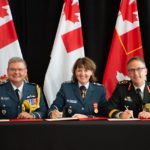 During a ceremony at the Embassy of Canada on August 15, Major-General Paul Ormsby became the new Canadian Defence Attaché to the United States, replacing Major-General Simon Hetherington who is retiring from the Canadian Armed Forces.

Major-General Hetherington has supported Canada’s mission since August 2018, advising Ambassador David MacNaughton on defence and security matters, enhancing military relations, and helping to tell the stories of the men and women in uniform. “Major-General Hetherington, in Cyprus, Bosnia, Afghanistan, and indeed, here in the United States, you have made your country proud,” said Ambassador MacNaughton. “My friend, Simon, thank you for wearing the uniform. We are better for your service. On behalf of Canada, thank you.”

Major-General Ormsby is intimately familiar with the Canada-U.S. defence relationship. As an Air Combat Systems Officer in the Royal Canadian Air Force he has served as Deputy Commander for the Continental United States NORAD Region, worked at the Pentagon as the Chief of Defence Staff’s Liaison Officer, and overseen Canadian Armed Forces plans for the defence of North America.

As Defence Attaché, Major-General Ormsby is now responsible for Canada’s defence programme in the United States, which includes supporting Canadian Armed Forces operations. He will also maintain relations with the United States Department of Defense, including the Office of the Secretary of Defense, the Chairman of the Joint Chiefs of Staff, and the Joint Staff.

Ambassador MacNaughton welcomed Major-General Ormsby to Washington, saying, “We look forward to working closely with you in continuing to strengthen the Canada-U.S. defence relationship.”