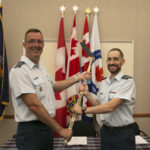 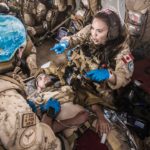 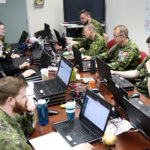 Canadian Armed Forces (CAF) members continue to work with U.S. women and men in uniform to keep us safe at home and abroad. Here are a few highlights of their work over this past month:

A formal change-of-command, complete with a signing ceremony, is a long-standing Canadian military tradition that marks the public transfer of command responsibilities. As he welcomed Lieutenant-Colonel Klemen to EADS, Colonel Emil Filkorn, EADS Commander emphasized that “Canadian Forces personnel are a critical part of EADS daily operations and play an essential role in protecting the North American airspace.” In keeping with Canadian tradition, a hockey stick was presented to Lieutenant-Colonel Klemen from outgoing EADS Canadian Detachment Commander Lieutenant-Colonel Bruce MacLean during the event.

On July 10, Canada’s Chief of the Defence Staff General Jonathan Vance assumed responsibilities as Chair of the Women, Peace, and Security Chiefs of Defence Network in support of United Nations Security Council Resolution 1325. The resolution requires UN Member States to promote women’s participation in peace processes and conflict prevention, protect women from gender-based violence, and take women’s needs into account as ex-combatants or refugees. Canada’s feminist foreign policy recognizes including women and girls in peace processes contributes to global stability and reconciliation. Our leadership of the Women, Peace, and Security Chiefs of Defence Networks shows we are committed to a global  peace and security agenda that addresses gender discrimination that affects women and girls around the world.

Members of the “Five Eyes” intelligence alliance – Australia, Canada, New Zealand, the United Kingdom, and the United States – recently participated in a weeklong cybersecurity exercise in Suffolk, VA. Exercise Cyber Flag is meant to improve our ability to respond to cyberattacks and bolster partnerships keeping malicious actors out of our cyber infrastructure. More than 650 cyber professionals, divided into twenty teams, worked throughout the week to thwart malicious attacks and intrusions on complex stimulated networks designed specifically for the exercise.

Royal Canadian Air Force Captain Shae Luhowy, who is part of the embedded Canadian contingent at U.S. Cyber Command, was the first non-American Exercise Director. Captain Luhowy, who had been planning Cyber Flag for almost one year, purposefully mixed together exercise teams from participating agencies and nations to ensure continued interagency cooperation and integration. He commented the teams were “very happy to be able to pick up some ideas and learn from the other teams.”

Coast Guard Rear Admiral John Mauger, U.S. Cyber Command’s Director of Exercises and Training called the exercise a success. “I am confident that through the work that has been done in this exercise to integrate teams and have them work as one and fight together, that we will present an imposing force for our adversary in this space.”

Follow @CAFinUS to learn more about CAF’s work in the U.S. and abroad.