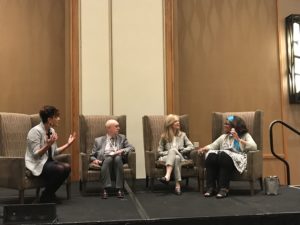 Earlier in June, Canada’s Consul General in Denver Stéphane Lessard spoke to the GlobalMindED conference about creating more opportunities for women and girls in STEM. In his remarks, the Consul General touted the Government of Canada’s commitment to gender equality, including socio-economic opportunities. During Canada’s G7 Presidency last year, we made history by including gender equality and women’s empowerment into all G7 initiatives and commitments. We have continued to include gender equality as a consideration when pursuing both foreign and domestic policies.

While the Consul General made clear we are proud of the progress that has been made for women and girls in Canada and abroad, he also made clear there is more to do – particularly when it comes to opening doors in STEM fields. Diversity and inclusion in the classroom to the boardroom are fundamental Canadian values. Consul General Lessard told the crowd:

Advancing gender equality and the empowerment of women and girls is a top priority for Canada, in STE(A)M and all sectors.  This is critical to help create  lasting solutions to pressing challenges in my country and elsewhere; challenges such as creating new economic opportunities for under-represented groups such as Canadian indigenous women and girls, reducing poverty in developing countries, building economies that work for everyone, preparing for the jobs of the future, fighting climate change, or advancing peace and security.

The Consul General wasn’t the only Canadian looking to break down barriers for women and girls in STEM fields. Entrepreneur, author, and founder of TechGirls Canada Saadia Muzaffar gave a keynote address at the conference. She spoke about the steps that have been taken to improve opportunities in STEM academic fields and careers for Canadian women and girls, but explained gender stereotypes and few female mentors remain important obstacles. This message is critical for institutions and policymakers alike.

The GlobalmindED conference in Denver coincided with Women Deliver, the world’s largest gathering on gender equality and the health, rights, and well-being of women and girls in Vancouver. At the start of Women Deliver, Maryam Monsef, Minister of Women and Gender Equality and Minister of International Development announced a $300 million CAD gender equality fund to support increased opportunities for girls and women in Canada and around the world. This fund is the first of its kind, bringing together Canada’s business and philanthropic communities. And, it is a central piece of Canada’s Feminist International Assistance Policy, recognizing the important work women’s organizations do in lifting up economies and supporting human rights.

In Denver, Vancouver, and beyond, the Government of Canada is not just committed to gender equality, but is an international leader in this effort.