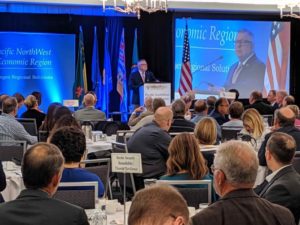 Canadians and Americans were in Saskatoon, Saskatchewan earlier this summer for the Pacific Northwest Economic Region (PNWER)’s annual summit aimed at “increasing the economic well-being and quality of life for all citizens of the region, while maintaining and enhancing our natural environment.”

In a keynote address, Canada’s Public Safety Minister Ralph Goodale emphasized the regional ties between states, provinces, and territories in the Pacific Northwest that bring Canada and the U.S. closer together as economic and trading partners. He told the crowd that PNWER has helped sustain and strengthen our remarkable commercial relationship for nearly 30 years, noting all of the legislators, state and local governments, non-profit stakeholders, and private sector who have contributed to our common goal – Canada-U.S. prosperity. Minister Goodale stated, “One of our common goals over these past four years has been to “thin” the Canada/US border – to make it ever more efficient and expeditious in dealing with legitimate trade and travel, but always safe and secure to properly protect both countries.” Minister Goodale also talked about the benefits of the new USMCA, reminding the attendees that this agreement will allow preferred market access for over 490 million consumers and $900 billion in bilateral trade.

In addition to the Minister, Seattle Consul General Brandon Lee, and Denver Consul General Stéphane Lessard also attended this year’s summit. Consuls General Lee and Lessard both spoke to audiences about the importance of the North American trade relationship and the benefits of the USMCA to the Pacific Northwest region. What’s more, they talked about improving our border infrastructure to safely and efficiently facilitate the cross-border movement of people and goods. Picking up on the Minister’s remarks about our border cooperation, they talked about expanding preclearance to additional ports of entry and cargo to make the region even more economically competitive.

Recognizing the importance of the Pacific Northwest to our economies, in 1991 a number of states and provinces joined together to create a public/private non-profit, PNWER. The organization has helped inform large-scale, bilateral initiatives touching on border cooperation and our shared prosperity. PNWER was actively engaged in the USMCA negotiation process and played an important role in pressuring the Administration to lift the tariffs on Canadian steel and aluminum. Moving forward, Canadian and American participants recognize our economic futures are linked and PNWER will continue to play a vital role in shaping our trading and security relationship.