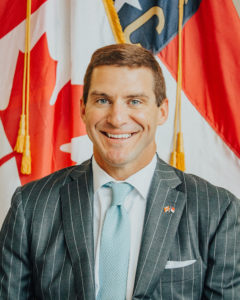 Greetings y’all from North Carolina. For the past two years I have had the honor of serving as Canada’s Honorary Consul where I work to advance and strengthen ties between Canada and the Tar Heel State. This is in addition to my day job as the executive director of the Research Triangle Regional Partnership.

Ties between Canada and North Carolina are strong and are a source of strength, particularly as we work to get our economies back on track. Did you know that Canada is North Carolina’s number one customer? Last year, two-way trade was valued at US$10 billion. Canadian investment here is also important. There are over 240 Canadian-owned businesses employing nearly 27,000 North Carolinians.

So what do I do as Honorary Consul? A lot of my focus is on promoting the bilateral relationship. Many people just don’t know how intertwined our economies are. Along those lines, in late June I hosted a discussion with Consul General Nadia Theodore on the United States-Mexico-Canada Agreement (USMCA), just ahead of its entry into force. That event focused on the trade deal’s importance to the Canada-North Carolina relationship and was delivered to staff of North Carolina’s federal Congressional delegation in Washington as well as to other key contacts in the Raleigh-Durham area. You can see the recording of it here.

Since becoming Canada’s Honorary Consul in Raleigh, I’ve learned a lot about just how strong the bilateral connections are – beyond just trade. In the area of sport, for example, North Carolina has been home to a National Hockey League team for over 20 years – which includes a number of Canadian players. The Carolina Hurricanes normally play right here in Raleigh. I know I’ve enjoyed attending games at PNC Arena, and while I can’t attend any this season, I am glad that Canada was able to save the day and host the Stanley Cup Playoffs. Let’s Go Canes!