Remembrance Day 2022 at the Embassy of Canada 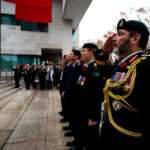 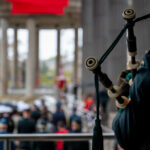 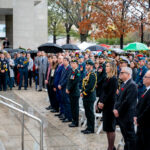 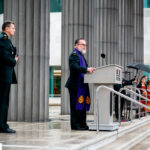 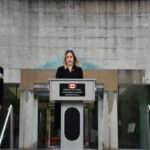 Every year on November 11, Canadians pause in a moment of silence to honour and remember more than 2,300,000 million Canadians who have served Canada, and continue to serve, during times of war, conflict, and peace.

“We think of those 916 Canadians who laid down their lives at Dieppe eighty years ago this summer. And of Reverend John Weir Foote who, on that August day, ran out onto the exposed beach – again and again and again – carrying wounded soldiers back to safety, until he had saved thirty lives. And, refusing to leave his brothers in arms on the beaches spent the next three years as a prisoner of war.

“I simply did my job as I saw it,” he would later recall. “It was a very ordinary piece of work.”

Ambassador Hillman went on to say that “eighty years after Dieppe, that humility – the humility to believe that the extraordinary is only ordinary – continues to manifest itself. I see it in you, the members of the Canadian Armed Forces.”

“Every day, your actions remind us of your willingness to serve your country. To commit to making a difference in the lives of strangers.  To go forward, meeting the many challenges we face.”

Against the backdrop of Capitol Hill, Major-General St-Louis reflected on the enduring history between Americans and Canadians who wear the uniform.

In the U.S., Veterans Day (originally known as Armistice Day) is observed annually on November 11, honouring all who have served in the U.S. military.

“I will end by telling all our members currently serving across the United States and to their families, Thank you. Thank you for your service. And to all our veterans, from all our countries, to all our fallen, and to our wounded, who walk among us, I say: