Netflix’s smash hit coming-of-age show, Never Have I Ever, has been one of the streaming platform’s surprise hits in recent years. Season 3 entered Netflix’s Top 10 in over 80 countries. Created by Mindy Kaling and Lang Fisher, the show is particularly acclaimed for the diversity of its cast, as well as its central theme focusing on the challenges faced by young people, especially girls.

On September 22, the Embassy welcomed almost 200 guests for a panel discussion on the importance of representation in media and the future of TV and film, which featured the show’s star, Canadian actress Maitreyi Ramakrishnan, and Bela Bajaria, Global Head of Television at Netflix. The conversation was moderated by Zaib Shaikh, Canada’s Consul General in Los Angeles.

Although the central characters are teenagers and on its surface the show appears to simply be an adolescent dramedy, Never Have I Ever tackles some complicated topics in a touching and heartfelt manner. Ambassador Kirsten Hillman’s introductory remarks highlighted the value of storytelling in the Embassy’s work and our everyday lives: “Storytelling and the arts are essential tools for dialogue on complex and difficult issues such as gender, sexual orientation, religion, and race. They can bring forward the voices of underrepresented communities.”

Both panellists spoke passionately about Never Have I Ever and how the ultimate factor in its success is a compelling storyline. Bela Bajaria touched upon on the importance of bringing more diverse stories and casts to Netflix subscribers, as well as the recent successes of global/international shows such as Squid Game (South Korea) and Money Heist (Spain). Maitreyi Ramakrishnan shared the captivating story of her unexpected rise to stardom from Toronto to Hollywood, as well as the significance of being one of very few South-Asian show leads. However, she is always keen to stress the key point that this character represents most teenage girls although just happens to be of Indian origin: “I hope Devi has taught young women that it’s okay if they make mistakes, it’s okay to be imperfect, it’s okay to feel a lot of emotions and it’s okay to feel them very strongly because that only makes you you”. Maitreyi is currently a student at York University studying Human Rights and Equity Studies and intends to apply this education to her future career in the film and television industry.

If you haven’t yet checked it out or are due a re-watch, three seasons of Never Have I Ever are available on Netflix, with the fourth and final season airing in 2023. 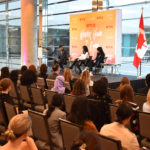 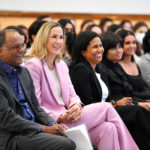 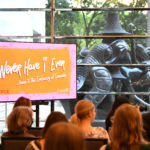 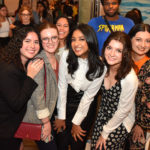