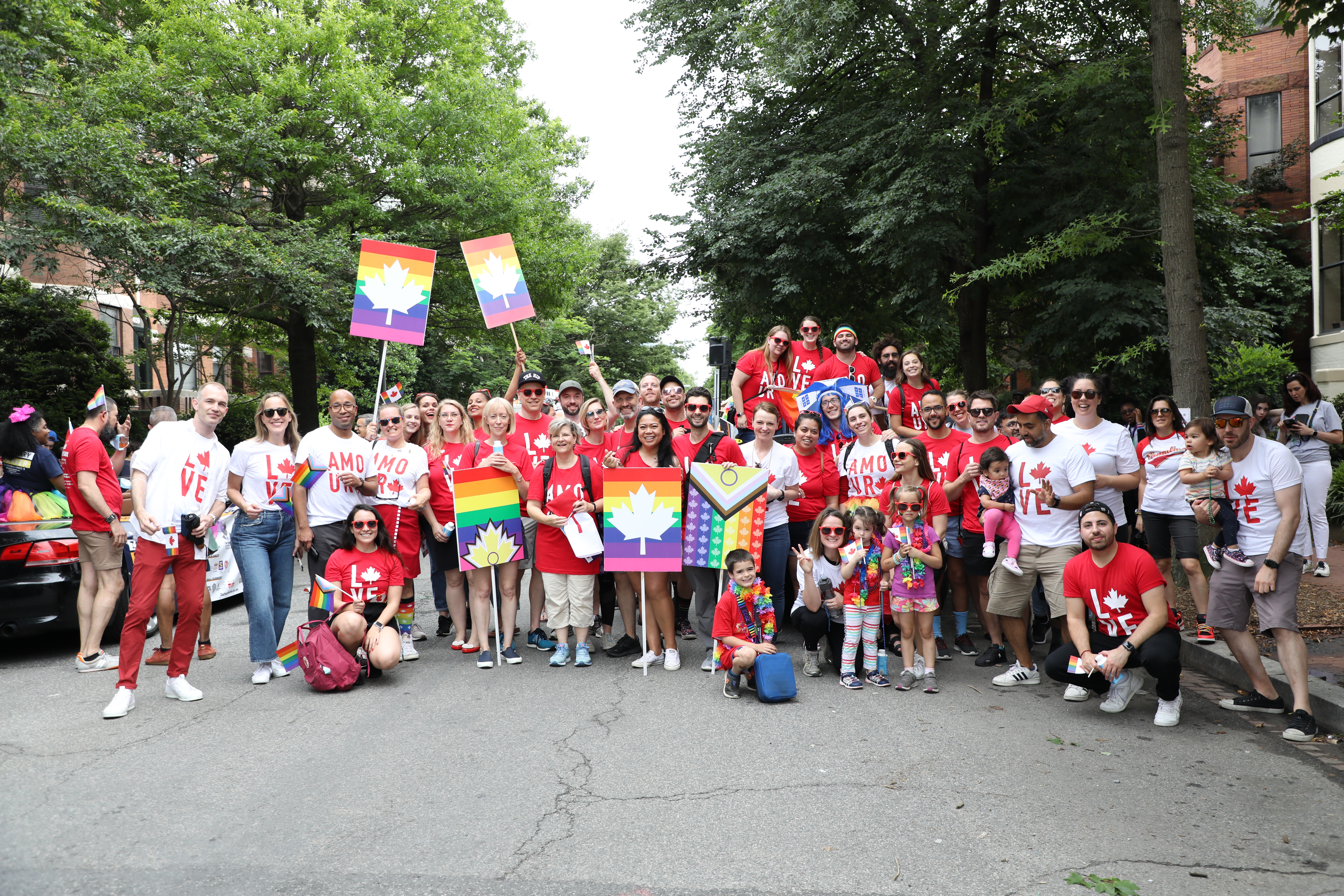 After a two-year pause due to the pandemic, Washingtonians welcomed the return of Capital Pride celebrations. In every corner of the city, festivities large and small took place showcasing support for LGBTQ2* communities, and Canadians in the area were proud to participate.

To kick things off, on June 9, the Quebec Office in Washington presented the film Matthias et Maxime by Quebec director Xavier Dolan on the National Mall. About 200 Francophile moviegoers gathered for this screening under the stars, organized as part of the Capital Pride celebrations and the French Embassy’s French Films on the GreenDC festival in partnership with the National Gallery of Art.

The Embassy of Canada race team then participated in the DC Frontrunners Pride Run 5K on June 10, with this year’s race proceeds benefitting local LGBTQ and disenfranchised youth organizations.

On June 11, Canadian Embassy staff, family and friends participated in the historic Capital Pride Parade with thousands of spectators looking on. Among the sea of rainbow flags and Pride banners, the maple leaf proudly floated through the cheering crowds alongside other diplomatic delegations from the European Union, New Zealand, the United Kingdom, Ireland, and Switzerland. This was the Embassy’s fifth year participating in the parade – one of the largest to ever take place in the U.S. Capital and across the country.

Participation in Pride events around Washington and across the U.S. further symbolizes Canada’s commitment to diversity, equality and inclusion and reflects the importance that Canada places on LGBTQ2 rights.

Canada has taken many important actions to ensure that all individuals are treated equally and with respect, at home in Canada and on the international stage. The government has invested in LGBTQ2 organizations fighting discrimination across the country, and passed legislation that provides Canadians with explicit protection from discrimination, hate speech, and hate crimes based on their gender identity or expression. In 2017, Prime Minister Justin Trudeau formally apologized for federal legislation, policies and practices that oppressed or discriminated against LGBTQ2 Canadians.

Canada also marks the International Day Against Homophobia, Transphobia and Biphobia (IDAHOTB) on May 17. Originally established to raise awareness about the violence and discrimination faced by lesbian, gay, bisexual, transgender, and intersex (LGBTI) persons, the growing global movement is now observed by 130 countries worldwide. In the words of Prime Minister Justin Trudeau, “[E]veryone deserves to live free of stigma, persecution, and discrimination – no matter who they are or whom they love.”

Stay tuned as Canadian Consulates General show their Pride in cities across the U.S. and join us as we continue to respect and celebrate the histories and achievements of LGBTQ2 communities throughout the summer.

Enjoy the celebrations and Happy Pride!

* Canada includes the ‘2’ in LGBTQ2 for Two-Spirit, a translation from the Ojibway term “niizh manidoowag,”which is used by some Indigenous people to describe their sexual, gender and/or spiritual identity.