The Detroit River Project: Seeking International Recognition for the Path to Freedom 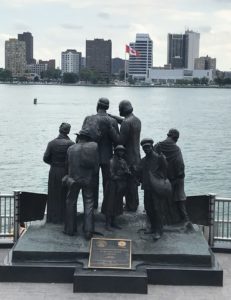 A passionate and dedicated group of American and Canadian activists, educators, and community members are advocating for the designation of the Detroit River between Detroit, Michigan and Windsor, Ontario as an UNESCO World Heritage Site for its significance in the Underground Railroad.

While the Detroit River was the lifeblood for the creation of a world-renowned city of great industries, business and music, its waters were also the gateway to generations of African Americans escaping to freedom on the Underground Railroad. The city and shores of Detroit beckoned untold numbers to hide and dare to cross the Detroit River waters to freedom in Canada. With the Underground Railroad code name “Midnight,” Detroit and its people represented a refuge of safety and advocacy during a time of great need for escapees and abolitionists fighting for the basic right of freedom. The Underground Railroad was the first multi-racial and multi-cultural civil rights movement in America.

The Detroit River Project seeks to enshrine, celebrate and inform the public regarding the crucial role of the people of Detroit and the Detroit River crossing. This project would provide information and education via public art and international designations, which would last long after the official ceremonies marking this important time in our shared binational history. Furthermore, it would replicate the collaboration of various groups and people, which led to the success of the Underground Railroad movement.