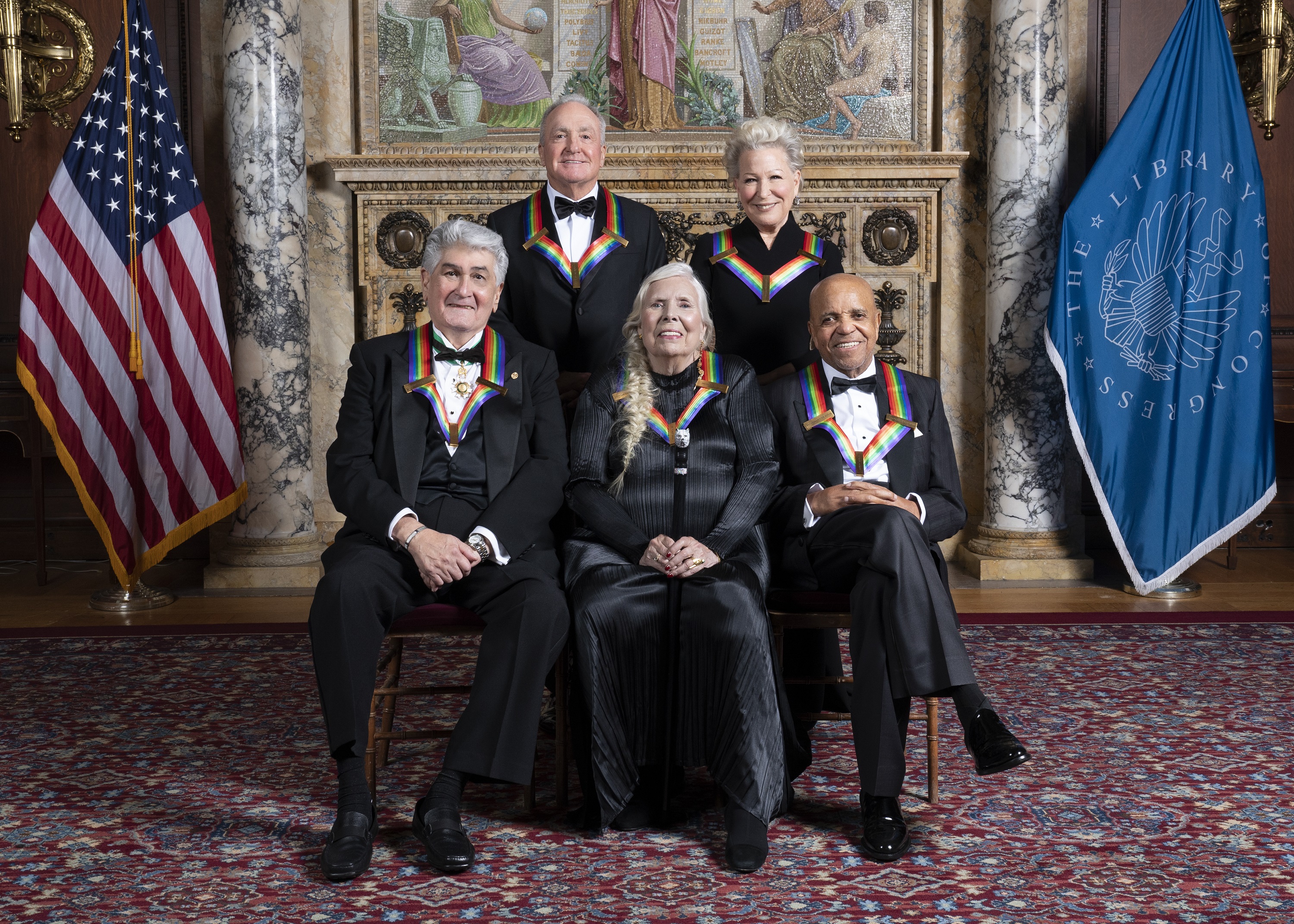 This year, the John F. Kennedy Center for the Performing Arts held the 44th Annual Kennedy Center Honors in Washington D.C. to once again celebrate those whose art and creativity have made significant contributions to the American cultural landscape. With a nod to the U.S. and Canada’s shared cultural fabric, two of the five Honorees for lifetime artistic achievement are Canadian – Saturday Night Live (SNL) creator Lorne Michaels and singer-songwriter Joni Mitchell.  Over the years, these Canadian luminaries have woven their artistic mediums into both Canadian and American history. SNL is on its 47th season and Joni Mitchell has 19 studio albums spanning over 53 years.

Canada’s Lorne Michaels was born in Toronto and is now a fixture in New York City and America. He began his career as a writer and broadcaster for CBC Radio, and then transitioned to comedy writing for American shows such as The Beautiful Phyllis Diller Show in Los Angeles. Michaels went on to create what is best known as SNL in 1975, changing the landscape of comedy television as we know it. From the beginning, SNL has been described as both a mirror and muse for life in America and is celebrated today as the most Emmy-winning television show in American history, helping to launch the comedy careers of  other celebrated Canadians: Mike Myers, Will Arnett, and new cast member Bowen Yang. The award-winning screenwriter has also produced feature films such as Mean Girls and Wayne’s World, and served as executive producer of comedy television shows such as Kids in the Hall and 30 Rock, among others. For all of this and more, Michaels was recognized with a 44th Kennedy Center Honor for lifetime artistic achievement, with President Biden telling Michaels, “If you can’t laugh at yourself, you’re in real trouble. And you make me laugh at myself a lot.”

Canada’s daughter of folk, Joni Mitchell, is native to the prairies where she began singing and dancing at the age of nine after recovering from polio. Mitchell started singing in small  nightclubs and coffee houses in Saskatoon, Saskatchewan and throughout western Canada before heading to Toronto and then onward to reside in the famous music haven Laurel Canyon in Los Angeles in the 1960s. Mitchell captivated audiences with her soulful folk music spanning across genres. She signed to Reprise Records in 1968 and went on to release 19 albums that had a profound impact on American culture, with songs like  “Both Sides Now”, “Big Yellow Taxi”, “Woodstock”, and “River”.  Starting from small beginnings in Alberta, Mitchell has become an icon of modern music and is one of the most influential songwriters and creators of our age, including her talents as a poet, producer, and painter. She has also gone on to win eight  Grammy Awards and be recognized with a Lifetime Achievement award in 2002. The Kennedy Center honored Mitchell’s artistic genius to American culture that only continues to grow, with Canada’s own actor Dan Levy citing that her songs truly “capture who we are”.

Joyous celebration at the 44th Kennedy Center Honors last night! Congratulations to all the honorees – particularly proud of our two Canadians who were honoured @jonimitchell and #LorneMichaels. What a delight to get to spend some time with them. @kencen #KCHonors pic.twitter.com/cGtr6EllIx

Ambassador Hillman was delighted to attend the in-person tribute at the Kennedy Center on December 5 to celebrate alongside the two Canadian Honorees. She was incredibly proud of all of the 44th  Honorees for their lifetime artistic achievements: operatic bass-baritone Justino Díaz, Motown founder, songwriter, producer, and director Berry Gordy, Saturday Night Live creator Lorne Michaels, legendary stage and screen icon Bette Midler, and singer-songwriter Joni Mitchell.

Tune in to watch The Kennedy Center Honors on CBS on Wednesday, December 22 at 9/8 pm Central Time.