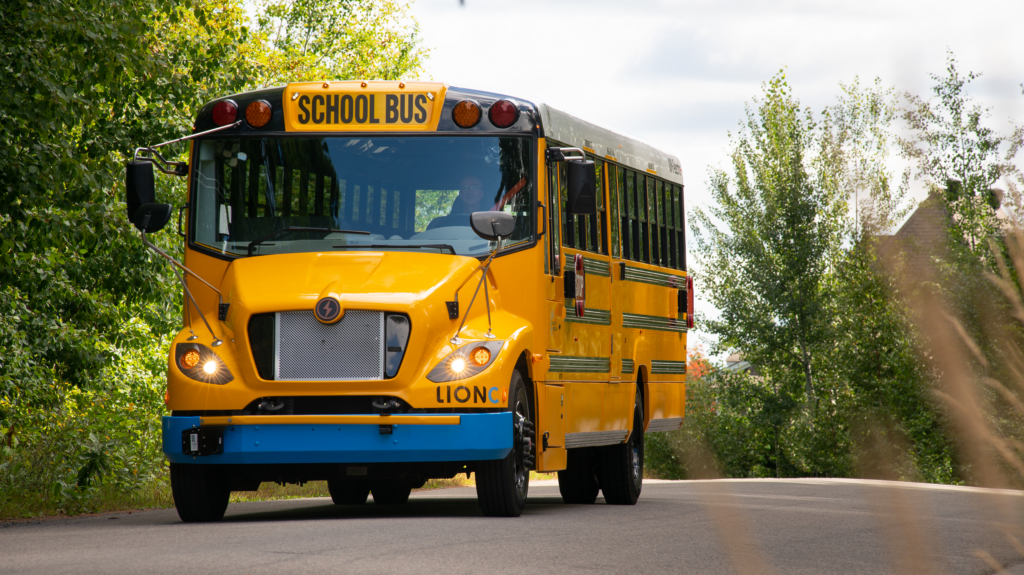 Zero-emissions electric school buses are rolling out across the United States, bringing cleaner, more energy-efficient transportation options to riders. Moving the needle in America’s heartland, Canada-based Lion Electric, a leading manufacturer of all-electric medium and heavy-duty vehicles, announced plans in May 2021 to build its first-ever U.S. production plant in Joliet, Illinois. Located just outside Chicago, the Midwest’s most vital transportation hub, the new Lion facility will represent the largest dedicated production site for zero-emissions medium and heavy-duty vehicles in the U.S. and give Lion its biggest footprint in the market.

In Illinois, Lion Electric has committed to an initial investment of at least US$70 million over three years. Upon completion, the new factory will have the capacity to produce 20,000 electric buses and medium and heavy-duty trucks annually. The new facility will also put Illinois at the forefront of a national movement to transition to zero-emissions vehicle use, and contribute to advancing the state’s goals of putting one million electric vehicles on the road by 2030. With over 400 of the company’s electric school buses already on the roads, along with an agreement with Amazon to acquire up to 2,500 Lion trucks by 2025, Lion Electric is positioned to meet this growing demand for electric transportation options.

The 900,000-square-foot Lion production facility will bring approximately 1,400 new jobs to the state over the next five years. This additional production capacity will help Lion scale up its electric bus production as the U.S. market moves to electrify a large portion of its school bus fleet. The Illinois factory will initially focus on vehicle manufacturing, but Lion has indicated that it could ultimately add other functions such as R&D and engineering. The factory will complement the battery production facility that it is currently building in Quebec, which received support from the Government of Canada, as well as Quebec. This manufacturing plant will strengthen North American supply chains related to critical minerals, an important area of Canada-U.S. collaboration.

Headquartered in Saint-Jérôme, Quebec, Lion Electric is an innovative manufacturer of zero-emission vehicles. The company creates, designs and manufactures all-electric commercial urban trucks and all-electric buses and minibuses for the school, paratransit and mass transit segments. Lion is a North American leader in electric transportation and designs, builds and assembles many of its vehicles’ components, including chassis, battery packs, truck cabins and bus bodies. Over the last decade, Lion has established itself as a leader in the zero-emission heavy-duty vehicle industry, having delivered over 400 all-electric heavy-duty vehicles in North America with over 8 million miles driven since 2016. All of Lion’s vehicles are purpose-built for electric propulsion from the ground up, assembled in North America and are distributed and serviced through the company’s network of Experience Centers, at locations across the U.S. and Canada. Lion vehicles have unique features that are specifically adapted to its users and their everyday needs. Lion shares are traded on the New York Stock and Toronto Stock Exchanges under the symbol LEV.