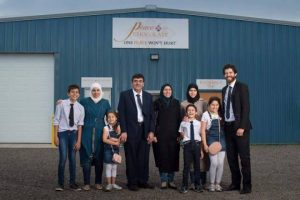 The story of the Hadhad family is a compelling one. For nearly 30 years, the Hadhad family sold chocolate through their factory in Damascus, Syria across the Middle East. Everything changed in 2012 when the factory was destroyed in a bombing, forcing the family to leave their home and go to Lebanon. After three years living as refugees in Lebanon, the family was presented an opportunity to go to Canada. Leaving again to go to a corner of the world they had never even visited, the family took a chance on starting a new life.

Antigonish, Nova Scotia became the new home for the Hadhad family. Through the support of the community, the Hadhad family was able to return to doing what they loved and knew best – making chocolate treats for everyone to enjoy. Peace by Chocolate was formed in 2016 and now sell their treats to the world.

If their name sounds familiar, it might be because Prime Minister Justin Trudeau highlighted them when he gifted their chocolate to Speaker Nancy Pelosi, settling a bet between the two on who would win the 2019 NBA Championship (and in typical Canadian fashion the Prime Minister graciously gave the Speaker treats even though the Toronto Raptors took the title).

The Prime Minister also continues to highlight the story of the family, their perseverance and their envelopment into the Canadian story. The family will also be featured in an upcoming film premiering on Netflix, Peace by Chocolate – the same title as their store. The Hadhad family demonstrate the true grit that it takes to be a Canadian and their Nova Scotian community demonstrated how to be a good neighbour by bringing the Hadhads into their fold.

Peace by Chocolate gained further international recognition when their chocolates were the first to be launched to and enjoyed on the International Space Station.

In October 2020 The Hadhad’s fantastic story of tragedy and triumph was launched as a book – “Peace by Chocolate, The Hadhad Family’s Remarkable Journey From Syria To Canada”

Peace by Chocolate brand and core values stand for PEACE:

If you are interested in learning more about their story and checking out their delicious treats, visit their website here: https://peacebychocolate.ca/.