How to Build Back Better Through the Lens of Gender Equity 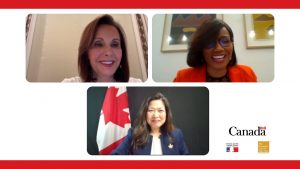 As we enter the second year of the COVID-19 pandemic, its inequitable burden is clearer than ever, with the negative economic impacts disproportionally affecting women. Greater job losses in female-dominated sectors, combined with expectations that women shoulder greater childcare responsibilities, have resulted in many women dropping out of the labor force entirely. When Prime Minister Trudeau and President Biden convened in February 2021 to craft the Roadmap for a Renewed U.S.-Canada Partnership, they committed to ensuring that women are not left behind by COVID-19, including by addressing the “she-cession” caused by the pandemic.

It was with this challenge in mind that the virtual 2021 Women in Business Conference gathered together more than 150 business leaders, government officials, and entrepreneurs from Canada, the United States and France for a half-day conference in March, focused on the systemic role the public and private sectors can play in accelerating gender parity in the workplace. This was the third iteration of the Women in Business conference, a partnership between the Consulates General of France and Canada in New York, and The Economic Club of New York.

Other panels, featuring luminaries such as Jane Fraser, CEO at Citigroup, Mary Barra, CEO and Chairman at General Motors, and Sara Eisen, Co-Anchor of CNBC’s “Closing Bell”, discussed how the crisis is threatening the pipeline of women leaders and potentially reversing progress that has already been made, as well as how we can use this crisis as an opportunity for genuine change in diversity, equity and inclusion. Full recordings of all four sessions are available here.