Got milk?! Cross Border Coordination Gets Water Flowing into the Milk River Once Again 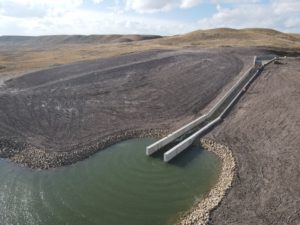 Out between the plains and hills of the “Treasure State” of Montana, and the “Wild Rose” Province of Alberta, runs the St. Mary and Milk Rivers. Those waters have been intertwined since water infrastructure was built in the early 1900s and managed under the 1909 Boundary Waters Treaty. In any given year, water diverted from the St. Mary River to the Milk River provides the Milk River with 60-100% of its flow. Those waters support drinking water and irrigation for just over 2700 residents while irrigating 1500 ha (3600 acres) in the USA, and 3300 hectares (8,000 acres) in Canada, typically moving just over 310,000 cubic decametres (250,000 acre-feet) of water [Paterson, 2016]. How much water is that? About 8,000 of Washington, D.C. Capitol Rotundas or about 125,000 Olympic-sized swimming pools!

However, May 17, 2020, added to the year’s woes when part of that infrastructure failed, severing the tie between the two rivers and reducing the water supply to cities, towns, indigenous peoples, and agriculture in both countries. That piece, known as Drop 5, is the last in a series of five drops to help move water down 60 meters (200 feet) in elevation as it goes to the Milk River, all the while also reducing the energy of the flowing water.

Commitments from both sides of the border, and at all levels of government, helped to ensure an efficient reconstruction, despite being in the middle of a worldwide pandemic. Construction materials from Alberta were able to get to the construction site through a specialized border crossing, via coordination between the U.S. and Canadian federal governments. Safety precautions and long-time collaboration facilitated these actions, keeping construction on track. Overall, these efforts reduced the time needed to haul each load, thereby also significantly reducing both time and costs.

After almost five months, water again began flowing on October 8. Thanks to partnerships and a commitment to solving problems, this story is just one of many successful, long-standing, collaborations between Canada and the U.S.