Separate, Together: Hono(u)ring Independence Day and Canada Day, without the Crowds

This is a guest post submitted by our friends at the U.S. Embassy in Ottawa.

The United States relationship with Canada is known for many things – we share the world’s longest undefended land border and one of the largest trade relationships in the world, and the connections between our countries go beyond policy and politics. We share family ties, similar cultures and values, and have been distinct but undeniably integrated friends, partners, and allies for 153 years.

We’re also known for each hosting the largest national day celebrations outside our own countries. Every year in early July, the rooftop at 501 Pennsylvania Avenue and the lawn at Lornado fill with thousands of our closest friends as we celebrate Canada Day and July 4.

However, like birthday parties, high school proms, award shows, and weddings, 2020 forced us to take our celebrations virtual.

Inspiration struck when, in the height of the lockdown, we found our favorite lunch haunts, coffee shops, and “just because!” stores in the ByWard Market adorned with brightly colored cartoons and positive messages on their boarded-up windows. Many of our Market neighbors had hired local Ottawa artist Robbie Lariviere to bring his signature style of cartoon-based drawings and stylized lettering to the normally bustling neighborhood that stood eerily quiet during the spring months.

Robbie, who grew up just across the border from the United States in Cornwall, Ontario, has artwork all over the city.  Once you’re familiar with his style, you begin to see it everywhere.  It was a no-brainer – we wanted to work with Robbie to use art to connect with our community here in Ottawa and online, and bring some smiles and color to people’s day in honor of Canada Day and July 4.

After reaching out to Robbie via his Instagram, @falldowng, we worked with him to develop ten murals with the theme “separate, together” with a special U.S.-Canada twist. Each mural tells the story of a unique aspect of U.S.-Canada friendship from Halifax to Vancouver to the Arctic.

Each of the panels illustrate the relationship using elements from both sides of the border, pieced together into a mosaic of color and humor.  The busy illustrations draw viewers in like an I Spy book, compelling people to search for familiar images and think about the connections – some more obvious than others.  One of our favorites is the hatched line design in the top right corner of our Alberta panel, which is an ode to Canada’s (arguably) coolest superhero who lives in the United States, Wolverine!

“This project was a fun one,” says Robbie. “What made it special to me was the idea of combining two cities into one illustration, complementing each other and mashed into one.  A lot of research went into each piece, I for sure had to do my homework and focus on two [regions] at a time to create a balance of both.”

Installed on the Embassy’s exterior fence on Sussex Drive just in time for our national day celebrations, our team is immensely happy with this series, as is the artist.  “Overall I had an amazing experience designing these ten illustrations for the U.S. Embassy.  I’m very grateful for the opportunity,” says Robbie.

Now that Ottawa is in Phase 3 of re-opening, we are starting to return to the office and more and more people are walking around the ByWard Market.  It’s thrilling to see people stopping to take in the artworks, sometimes posing for pictures.  It reinforces that we will get through these tough times together (but apart) because in the long term, Canada and the United States have one of the strongest, unwavering bilateral relationships in the world.

We are neighbo(u)rs, after all. 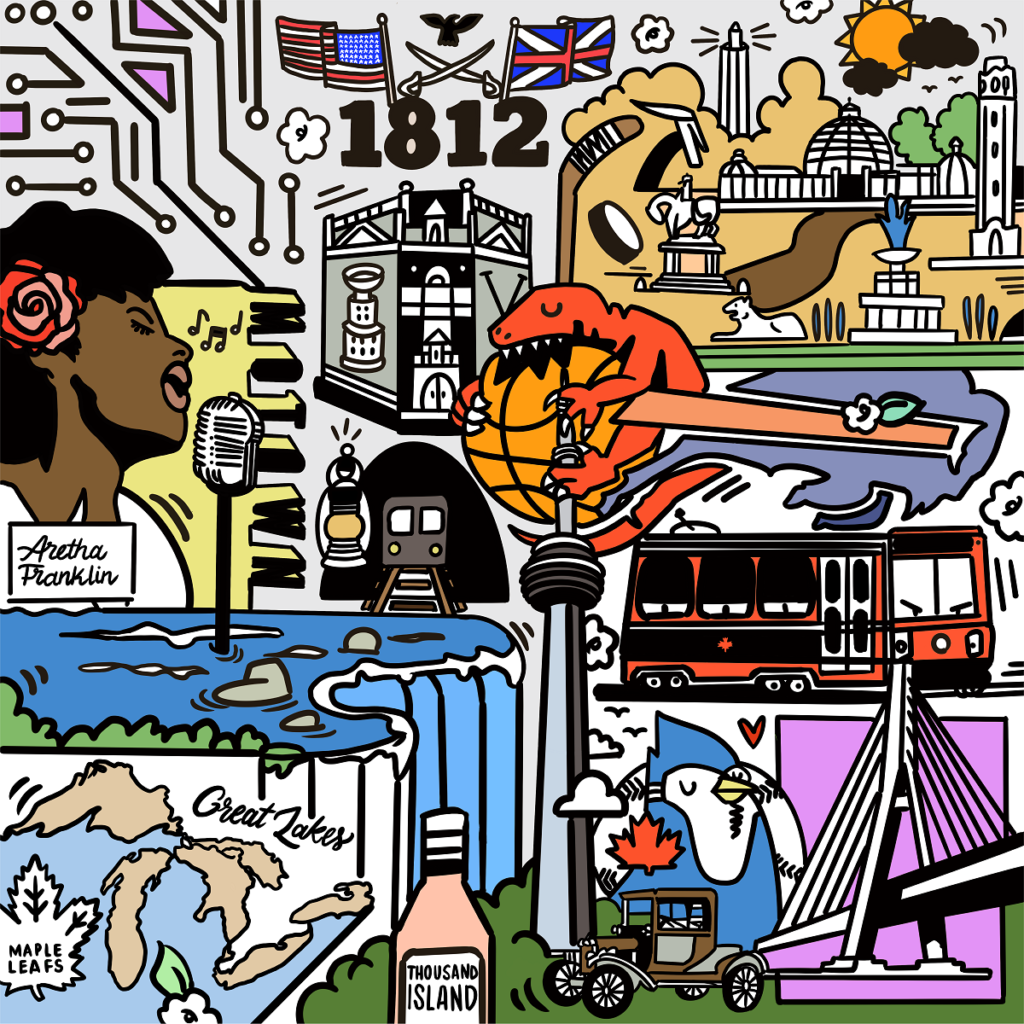 From the 2019 NBA Championship team to the shared Great Lakes to Motown legend Aretha Franklin, this mural exhibits some of the many things that both Americans and Canadians love. 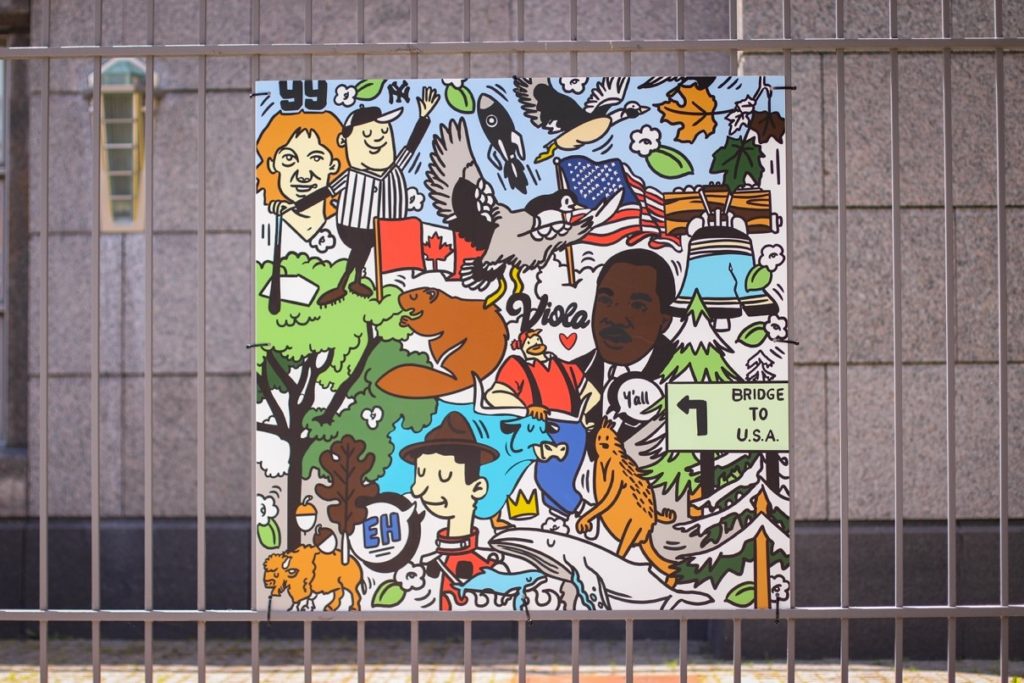 Difficult as it is to sum up the relationship of Canada and America in one picture, Robbie Lariviere did an excellent job. From the iconic Mountie to the cracked Liberty Bell, y’all are going to like this one, eh? 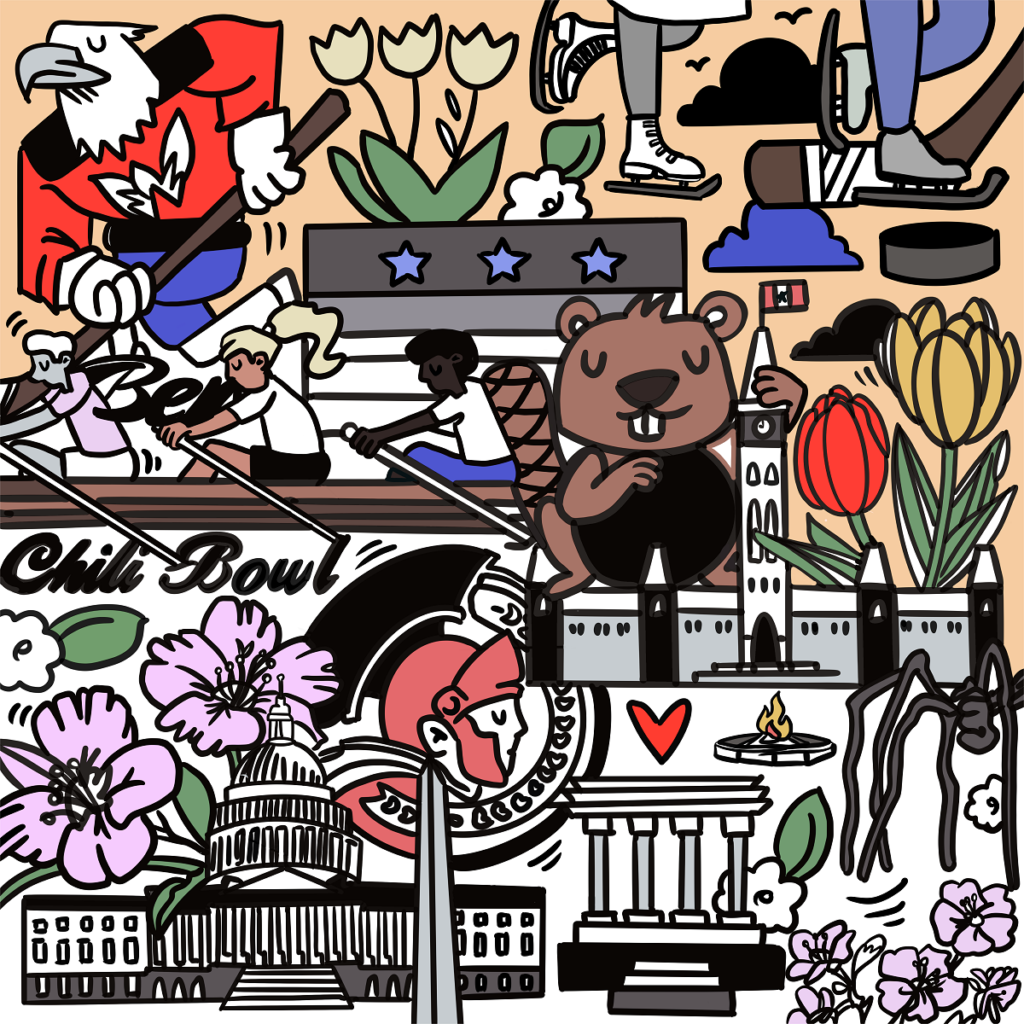 The spire of the Washington monument, the circle of the Eternal Flame: both in front of their country’s legislative buildings.  Stop and smell the flowers – DC’s cherry blossoms and Ottawa’s tulip festival draw thousands of tourists each year.  The capital cities also have epic waterways on which residents stay active, either rowing on the Potomac or skating on the Rideau Canal.