Reflections from the Epicenter: a Canadian Doctor Describes Being on the Frontlines of the COVID-19 Outbreak 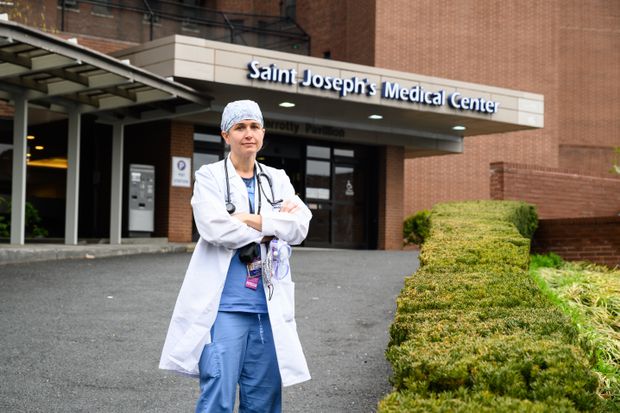 As New York begins to turn a corner after being the global epicenter of the COVID-19 outbreak, medical professionals are breathing a cautious sigh of relief.

Dr. Leslie Bottrell, a Canadian resident physician, has spent most of the crisis working in the ICU unit at St. Joseph’s Medical Center in Yonkers, just north of New York City.

Dr. Bottrell was born and raised in St. Thomas, Ontario, but her journey to New York was not a straight line from there.

Her first visit to New York City was for an interview to attend medical school on the other side of the world, at the University of Sydney in Australia, where she had spent time traveling and eventually working at the 2000 Olympic Games.

She instantly fell in love with New York— the energy, the people, and all its iconic places, including the World Trade Center, which was her last tourist stop on that trip.

That was the week before 9/11— a tragedy that only solidified her love and admiration for New York’s resilience.

After ten years and the birth of her two sons in Australia, Dr. Bottrell and her husband moved to Shanghai, where she practiced family medicine and completed acupuncture training. Six and half years later, her husband was offered a job opportunity in New York.

As excited as she was about the opportunity to live in the Big Apple, the move would present a substantial career challenge for Dr. Bottrell. Despite her many years of practice, the American system did not recognize her medical license, and she would have to start her training from scratch.

But her love for the city, as well as the vibrant Canadian expat community that welcomed her with open arms, helped alleviate the situation.

After an intense year of studying for a series of licensing exams, she was confronted with the difficulties of finding a placement at a New York City hospital as a foreign graduate. But in typical New York fashion, it was a random meeting in the elevator of her building that got her foot in the door at St. Joseph’s. It turned out the president of the hospital was a neighbor, and he encouraged her to apply after seeing the stack of medical books under her arm.

Fast forward to 2020, the impact of the COVID-19 crisis was felt early on at St. Joseph’s, when patients from New Rochelle, the largest cluster in the country, started flooding in around mid-March. Dr. Bottrell was scheduled to rotate out of the ICU unit, but given her prior experience in intensive care, she volunteered to stay on and ended up spending most of the crisis taking care of critically ill COVID-19 patients.

That decision coincided with the much tougher decision to send her sons to Canada to continue remote learning with her parents, both retired school teachers, in St. Thomas. She knew that her schedule would make it impossible for her to supervise them, not to mention the realities of the boys being cooped up in a small New York City apartment.

“I’ve had my moments where I want them to be physically around me, but it’s hard to dwell on that when you have seen such devastation to families. And how much more will we appreciate each other once this is over…. I try to think beyond right now”.

At the peak of the crisis, her days would start at 7 am. She would be given a daily allotment of personal protective equipment and a patient list for the day, which would end around 8 pm.

The shifts were intense, non-stop, and a constant balancing act between limiting her own exposure and offering compassionate care to her patients. Overhead, the blaring of “Code-99” on the intercom system— signaling cardiac or respiratory arrest— would be heard almost on the hour, as opposed to once or twice a week in normal times.

This would add to the high-stress environment. “Nobody was surviving the codes”, she said.

Dr. Bottrell also spent a lot of time on the phone with distressed family members who weren’t able to visit their loved ones. “That was agonizing”, she said. But she was amazed at the strength shown by the families in such difficult moments. She was especially moved by the fact that despite their immense shock and sadness, they would so often thank the medical professionals for their work— a pure demonstration of the type of solidarity and kindheartedness that define New York.

And when asked if this experience has changed her plans to stay in New York, Dr. Bottrell was clear that it did not.

“I always have a yearning to go back to Canada, you develop a greater appreciation of your home when you’re away. But I love this city, the community, and the friends we have made. And I want to be there for my colleagues, especially if there is a second wave.”

She then recalled what Canadian actor Mike Myers said at the 2017 Maple Leaf Ball, the annual charity dinner for the Canadian community in New York City: there is no one more patriotic than a Canadian who lives abroad.

After two decades of living overseas, including on two different continents, that statement could not be more true for Dr. Bottrell.