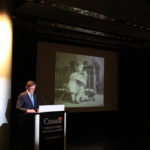 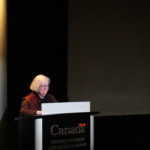 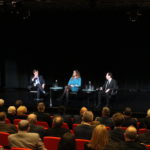 On Monday, the Embassy partnered with the U.S. Holocaust Memorial Museum to screen the Canadian documentary “Prosecuting Evil: the Extraordinary World of Ben Ferencz” to commemorate International Holocaust Remembrance Day and the 75th anniversary of the liberation of Auschwitz-Birkenau.

Martin Loken, Minister of Political Affairs, told the audience we all have a shared responsibility to remember, and also to live up to our promise of “Never Again.” He said:

We listen to survivors, the primary witnesses of the atrocities of the Nazi regime. We listen to remember this horrific chapter in human history … 75 years later, we remember. Because our world is still not immune to the scourge of hatred and indifference. As Jewish communities continue to face unacceptable acts of antisemitism, we stand with them. We stand with the victims and survivors of the Holocaust and vow “Never Again.”

We were humbled by the presence of so many survivors, including Louise Lawrence-Israëls who shared her story. She spoke of her life in hiding for two and a half years in the Netherlands during the Nazi occupation. She spoke of her family, their fears, their struggles. And, she remembered what it felt like when Canadian Armed Forces liberated her city in 1945. She reminded us all:

The history of the Holocaust must be taught, and Holocaust memory must be secured. The world must always remember what happens when any society is driven by hate and anti-Semitism. Today, I am one of many Holocaust Survivors who volunteer at the United States Holocaust Memorial Museum. We share our history so that our children’s and grandchildren’s futures will not be like our past.