Come from Away Comes to Washington 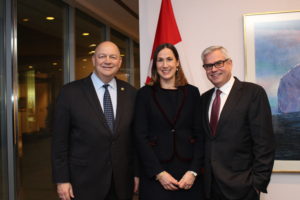 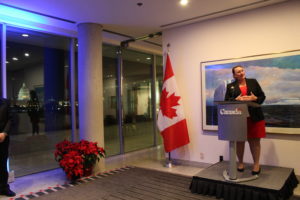 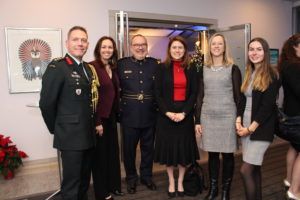 The tragic events of September 11, 2001 profoundly impacted Americans and Canadians alike. The terrorist acts claimed thousands of lives, including those of 24 Canadians.

This tragedy reinforced the enduring bonds of friendship that underpin the Canada-U.S. relationship.  In solidarity with our American friends, the government of Canada did what had never been done – shut down Canada’s entire airspace, instructing 270 flights over the Atlantic to go back to Europe and directing another 224 flights with more than 33,000 passengers to land at Canadian airports.

Code-named, Operation Yellow Ribbon, Transport Canada swiftly set up a system to keep track of the 224 diverted planes.  And one by one, the planes landed – in Goose Bay, Gander, and Stephenville, and larger centres such as Moncton, St. John’s, Halifax, Montreal, Toronto, Winnipeg, Calgary, and Vancouver.  And then there was the grueling process of assessing and searching all passengers and every piece of baggage matched to its owner.

And the citizens of Gander, Newfoundland & Labrador – a town of 10,000 people —  welcomed more than 6,000 stranded passengers from 38 aircraft into their community, their homes and their lives.  In welcoming these travellers, the town of Gander showed, in the words of one passenger, that “there are still good people left in the world.” The award-winning musical Come from Away tells this story about the events that occurred on 9/12, leading to lasting friendships.

The United States response to the tragic events of September 11, 2001,  demonstrated the implicit resilience that lies at the heart of both the United States and Canada’s way of life and the fierce determination to maintain the core principles to keep Americans and Canadians strong and safe.  We celebrated this resilience at the Embassy of Canada last week when we welcomed guests to honour the return of Come from Away to Washington.

Steve Dickson, Dan Elwell, and Carl Burleson of the Federal Aviation Administration, thank you for joining us here today. I’d also like to acknowledge Patricia Cogswell at the Transportation Security Administration, Kathleen Kraninger from the Consumer Financial Protection Bureau, and my friend CJ Mahoney at the Office of the United States Trade Representative. Thank you to Deborah Rutter and the staff of the Kennedy Center for bringing the inspiring story of Come From Away back to Washington.

I host many events here at the Embassy. We fill this floor, our terrace, our huge Canada Room downstairs.

There are events that bring our businesses together, advance our energy partnership, build our defence and security relations.

Tonight is something different.

Tonight I wanted to bring together a small group of people – people who have lived the friendship and love between our two countries under the most difficult of circumstances.

We remember that dark September day 18 years ago. As the world watched the horrific scenes of 9/11, professionals leapt to action. The Federal Aviation Administration ordered all civilian aircraft to land and American airspace was shut down.

As these measures were imposed, some 500 airplanes from around the world were en route to the United States. More than 200 would be diverted to Canada.

Place yourself in that stark scene. You’re sitting on a plane – or for some here, in the cockpit – over the Atlantic Ocean. Maybe you’re heading home. Maybe you’re starting a vacation. Maybe you’re about to be reunited with friends or family. You’re looking forward to landing in America.

Then an announcement tells you there’ll be a diversion. You’ll land in Newfoundland. Okay, maybe it won’t be long. Where’s Newfoundland again? People did not have smartphones in 2001 and information trickles in slowly. You hear planes were hijacked in New York City. America was under attack. It’s terrorism, they say. The twin towers are gone. Are your friends okay? Was your family there? Are they alive?

By now you’re on the tarmac in Gander. What happened out there? What world is waiting when you get off the plane?

Place yourself in that moment. Pilot Beverley Bass remembers waiting on her plane for 28 hours after landing. She didn’t know what to expect when they walked into the airport. And then she saw tables of food lining the terminal.

The people of Gander – a town of less than 10,000 – stayed up through the night preparing 7,000 lunch boxes, one for each of their guests.

In Gander and the nearby villages, people placed makeshift beds in schools, community rooms, and churches. Bus drivers on strike walked off picket lines to support the effort. Local bakeries surged their production.

They hosted strangers in their own homes, offering beds, vehicles, and home-cooked meals. They listened to stories of worry and grief. They offered compassion and comfort. And, in typical Newfoundland fashion, they sang songs to lift spirits.

Canadians opening their arms to strangers. It’s not a new idea. Indeed, it’s central to our identity. It’s so routine that the Newfoundlanders were surprised there was a fuss about it.

They were surprised anyone would write a musical about what they did for the “Come From Aways”, as they call visitors to their community. They tell you helping, caring is in their DNA.

When people were scared and distraught, angry and afraid, they found warmth and kindness in Newfoundland. They found community, the very best of humanity. They came to learn that in the darkest of circumstances, good people are waiting to pull you through.

On September 11, 2001, security agencies in the United States and Canada responded quickly and seamlessly. Many in the room this evening know too well how the FAA and Transport Canada coordinated the closing of airspace. NORAD scrambled military aircraft. These actions demonstrated the strength of our relationship at the national level, a relationship that’s grown stronger since that tragic day.

In telling their story, Come From Away continues to shine the light. The story, its people, remains a symbol of optimism. It is a reminder of the power of community, that we are stronger together.

Enjoy the evening. Enjoy the show my friends.

And take care of each other. Thank you.