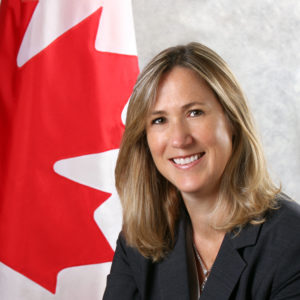 I arrived in Washington DC in the fall of 2017 to take up the position of Canada’s Deputy Ambassador to the United States. Since August of this year, I have been Canada’s Acting Ambassador.

I grew up in western Canada, in Calgary and Winnipeg. As a girl, I spent my summers with my grandparents on their farm in southern Manitoba, less than 10 miles from the North Dakota border. We crossed the border often, to go for pizza and to visit friends and extended family. I spent many hours during those summers at Lake Metigoshe – a lake that straddles the Canada-US border. I took swimming lessons at the Lake with kids from the US side. We went boating and waterskiing, crossing back and forth between our two countries all day long. The fact that we were two distinct countries did not really register to me as a child.

As I have traveled the US these past two years, I have learned that many Americans have stories like mine. Almost every day I meet Americans who have close Canadian ties – some have a Canadian parent or in-law, or a family member who has studied in Canada, others have fought alongside Canadians, and so many others do business with Canadian partners and customers every day.

Understanding and highlighting the close personal, economic and security ties between our people is at the heart of our work at the Embassy and across the US. The core of my job is to lead Canada’s team in Washington – and what a team it is! Every day I am struck by the energy, creativity, dedication and professionalism of our staff. I believe that this dynamism comes from the fact that, from every corner of the Embassy, people know that their work matters and contributes to our overall success.

I have spent the majority of my career as a trade lawyer, trade policy expert and a trade negotiator. My background and expertise are central to the role that I have played during the re-negotiation of the NAFTA. In addition to providing strategic advice and support to the Ottawa-based negotiators and political leadership, I have led our Embassy team and our network of Consulates as we reached out across the US to communicate and demonstrate the value and importance of Canada-US trade. These conversations took place, not just in corporate boardrooms and in the halls of the USTR, the White House and Capitol Hill, but also importantly, on factory floors, in small towns and around the tables of small businesses.

While the renegotiation of NAFTA was not easy, and there were some tense times, I am very proud of how people from across our country pulled together as Team Canada when talking to Americans during the negotiations. Over the course of two years, we have had hundreds of visitors to Washington and the message to our American friends was this: Canada and the US enjoy more than $2 billion per day in bilateral trade, and this is the source of millions of jobs on both sides of the border. So, while we should update and improve the NAFTA, we must not walk away from it. The message was strong and clear – from our Prime Minster, our Foreign Minister and their Cabinet colleagues, and from members of Parliament from other parties, Provincial Premiers and Ministers, mayors, business leaders, farmers, academics, unions and so many more. These voices together made a difference.

There are so many experiences that I have in my role that are meaningful and deeply rewarding – it is hard to mention just a few. I am proud of the mentoring role that I am able to play, inside and outside of the Embassy. I appreciate the opportunity to support women who, like me, find themselves in careers that have been largely dominated by men. Daily, I think about how I can best serve Canada and Canadians by what I do and by how I lead my team. I think about how we can best reflect the values of our country.

For three years now, I have had the great honour of representing the Canadian Government at our annual Remembrance Day Ceremony at the Embassy, where we are joined by friends and allies from the US, but also from countries such as Australia, the United Kingdom, France, Germany, Italy, Greece, Mexico and New Zealand. For me this is one of the most significant moments of the year, as we stand together to remember the fallen and recognise the daily sacrifices and commitment of our military personnel and their families to global peace and security. This year was particularly special as two American veterans and their families joined us. As I watched my colleagues from our Armed Forces, the Canada Border Services Agency, the Royal Canadian Mounted Police, the Canadian Security Intelligence Service and the Communications Security Establishment lay wreaths, I thought of all of the organisations and dedicated people in Canada and the United States, who work hand-in-hand on a daily basis protecting our citizens and defending the longest, most peaceful border in the world.

Each morning, as I enter Canada’s spectacular Embassy on Pennsylvania Avenue, I reflect on the great honour and responsibility of serving as Canada’s representative to the United States. People often note that I am the first woman to have done so, which for me makes the honour even more poignant. I know from experience that diversity of backgrounds, expertise and frames of reference lead to better public policy, decision-making and service to Canadians. I hope that the diversity in Canada’s US leadership team inspires Canadians from all walks of life to seek leadership roles and to foster dynamic and diverse workplaces.