Partners in Trade at the NASCO Continental Reunion 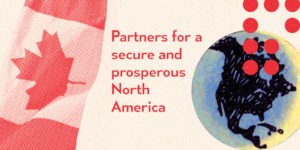 The North American Strategy for Competitiveness (NASCO) recently held their 25th Continental Reunion in Columbus, OH, convening officials from Canada, the United States, and Mexico, along with North Americans businesses and institutions.  Following the ratification of NAFTA, NASCO first started in 1994 to improve supply chain effectiveness for the trucking industry along the I-35 freeway corridor, which cuts through the center of the U.S., from Mexico to Canada. Since then, NASCO has continued to work with governments and the private sector across North America on supply chain management. As North America has become more integrated, NASCO has also expanded to look at trilateral workforce and energy independence.

Moving forward with the new USMCA was top of mind for attendees at this year’s conference. Discussions focused on ways the new agreement, once ratified, will keep North America at the forefront of the global economy. After all, NAFTA enables free trade among 490 million customers, trading $144 million per hour! Our total merchandise trade has more than tripled since 1993. The new USMCA modernizes our trading rules to better facilitate this commerce.

The Consul General of Canada from Detroit, Joe Comartin, spoke about the strong economic partnership between Canada and the U.S. Other Canadians in attendance, including former Prime Minister Stephen Harper and several provincial leaders, all emphasized the importance of USMCA to our future prosperity and a strong North American economy. They also spoke to ways Canada and the United States can increase regulatory cooperation, cut red tape, and ensure the efficient and safe flow of people and goods across our borders.