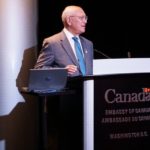 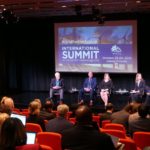 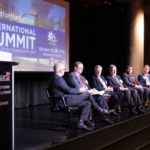 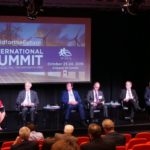 This week, the Embassy of Canada partnered with WIRES to host the WIRES International Summit on the Electric Transmission Grid. The Summit brought together diverse organizations from both Canada and the U.S. to discuss the cross-border grid of the future, how to get there, and the obstacles to overcome. The conversation focused around the vision of the North American electric grid – one that is clean, affordable, reliable, resilient and secure. Here are some key takeaways on the Canada-US electricity partnership:

CLEAN: 80% of Canada’s electricity is emissions-free, and we are working to increase this percentage by phasing-out coal-fired generation by 2030 and developing small modular nuclear reactors to transition remote and northern communities off diesel. Clean Canadian energy also supports the development of variable renewable generation in the United States by providing a flexible and instantly available backstop for wind and solar energies. This clean backstop is made possible by cross-border electric transmission lines – like the Great Northern Transmission Line in Minnesota – or as we call it in Canada, the Manitoba-Minnesota Transmission Project.

AFFORDABLE: Canada is blessed with a wealth of energy resources, including extensive hydro power. Electricity generation, transmission, and distribution makes up roughly 10% of the Canadian economy (compared to 5% of GDP in the U.S.) The importance of the electric grid as an economic driver in both countries cannot be understated. In 2018, Canada exported 61 terawatt hours of electricity to the U.S., the equivalent of powering almost 6 million U.S. homes. These exports save American households, consumers, and companies hundreds of millions of dollars every year on their electric bills.

RELIABLE: In 2003, a tree branch in Ohio caused a blackout in Canada and the U.S. that left 50 million people in the dark. That reminder of the interconnectedness of the North American grid gave rise to the North American Electric Reliability Corporation (NERC) and the shared reliability standards we have for both of our countries. These standards ensure that our electric systems work as they should, providing dependable service with minimal interruptions.

To build the most reliable grid we have yet seen in North America, we are jointly using smart and digital technologies, working with national laboratories, research organizations, utility companies, and suppliers on both sides of the border. Our cooperation and cross-border transmission infrastructure allow utilities on opposite sides of the border to quickly assist others in balancing the grid through the immediate dispatch of power, preventing black- and brown-outs, power surges, and other disruptions. This reliable electric grid is a second pillar in support of the economic activity it makes possible: regular, uninterrupted supply necessary for so many industrial, manufacturing, and work processes.

RESILIENT: Our Canada-U.S. partnership is a key part of grid resilience – the rapid recovery of regular service following exceptional impacts like storms and other incidents. This electricity partnership includes cross-border support for emergency response through mutual assistance arrangements. Over the last five years, more than 2000 Canadian lines workers and power crews have been deployed to the U.S. to help respond to emergencies and disasters. They have helped restore power during storms and other calamities from California to Florida, and most of the Eastern seaboard.

SECURE: The energy partnership between our two countries is also advancing grid security. Coordination and collaboration through organizations like NERC, the E-ISAC, and the Electricity Subsector Coordinating Council (ESCC) are central to our collective grid security efforts. Through cyber security initiatives like Project Lighthouse in Ontario, we have some of the clearest visibility into electric grid threats and intrusions in the world. Through effective and timely intelligence declassification, we are getting actionable information and notifications to Canadian grid operators in as little as 8 minutes. These capacities and successes flow both ways across the border to improve grid security for both our countries.

Thanks to over 35 electric transmission interconnections between the Canada and US power systems, the North American grid is highly integrated, with both countries enjoying a mutually beneficial and robust trade in electricity.

This cross border partnership and collaboration between government and industry has served communities and businesses on both side of the border, and will continue to ensure that our North American grid is able to modernize while remaining clean, affordable, reliable, resilient and secure.

The Canada-U.S. #energy relationship is responsible for tens of thousands of jobs on both sides of the border. Opening panel w @CDNelectricity @IBEW @Edison_Electric @ErnestMoniz and @Dentons on the importance of the grid as an economic driver. #GridfortheFuture @wiresgroup pic.twitter.com/xXg2jgmKNP