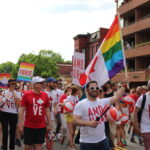 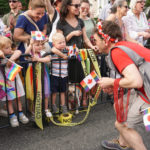 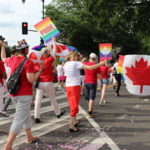 On June 8th, the Embassy of Canada proudly participated in the 2019 Capital Pride Parade, showing Canada’s support for LGBTQ2 rights both at home and abroad. Dressed in red and white, Embassy staff and families carried Canadian rainbow flags and signs, blasted iconic Canadian pop music, and greeted enthusiastic crowds along the parade route.

Our participation in Pride events across the U.S. is an important reminder of the Government of Canada’s commitment to inclusivity and LGBTQ2 rights around the world. Through our leadership in the Equal Rights Coalition, for example, we are working with LGBTQ2 communities in Canada and abroad to support and fund organizations to advance human rights and make equality a reality for these communities in developing countries.

What’s more, in the past five decades, the LGTBQ2 community has made great strides in advancing their legal rights in Canada.

On the International Day Against Homophobia, Transphobia, and Biphobia on May 17, Prime Minister Justin Trudeau issued a statement, “We all have a role to play to make sure LGBTQ2 people feel safe and can participate fully in Canadian society. The Government of Canada is working with LGBTQ2 communities and organizations in Canada and around the world to break down barriers and make equality a reality … Today, and every day, I encourage Canadians to strive for a future where everyone – regardless of their gender expression, gender identity, or sexual orientation – can live in equality and freedom.”

Throughout the summer, our Consulates General across the U.S. will be showing their Pride too. Stay tuned for more! Happy Pride!