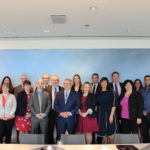 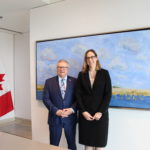 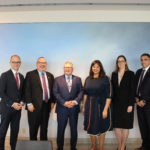 Canada’s Public Safety Minister Ralph Goodale was in Washington, DC this week to meet with his U.S. counterpart, Acting Secretary of Homeland Security Kevin McAleenan.  They discussed joint Canada-U.S. priorities that are fundamental to the security and prosperity of both nations, and agreed the Canada-U.S. border is sound, secure, and efficient.  They committed to continue ‎working together to further increase the value of our shared border through common infrastructure sites at ports of entry and preclearance expansions, like cargo projects.

Regarding national security, the two counterparts discussed the importance of ongoing international cooperation on containing any threats from extremist‎ travellers returning from the Syria-Iraq conflict zone. This includes ongoing work to gather and preserve the integrity of evidence from the battlefield that could be used in Canadian and American courtrooms to prosecute those who have travelled overseas to participate in the terrorist campaigns of Daesh.

Minister Goodale also discussed with Acting Secretary McAleenan ways in which the internet and social media platforms have increasingly become tools for terrorism and violent extremism, and how the international community may be able to work together to prevent people from abusing the internet to promote and sensationalize acts of terrorism.

While in DC, the Minister spoke to media about his meeting with Acting Secretary McAleenan and ways the U.S. and Canada are collaborating in North America and abroad, including Bloomberg, CBC’s Power & Politics (starts at 55:44), and CTV’s Power Play.