Between Friends, Entre Amis: A Snapshot of Canada-U.S. Relations 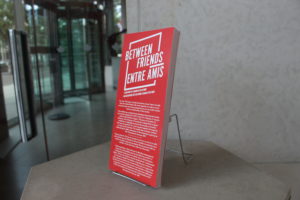 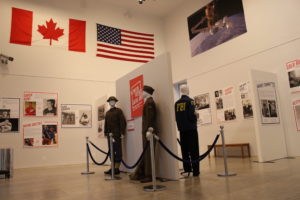 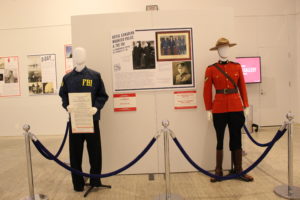 For over 150 years, Canada has had no closer friend and ally than the United States. We work together to make our two countries safer and more prosperous so we can build a better future on both sides of the border. To showcase some of the people and events that have shaped the relationship between our two countries, the Embassy of Canada’s Art Gallery is currently displaying Between Friends, Entre Amis: A Snapshot of Canada-U.S. Relations.

The exhibit was first created by the Meridian International Center and was displayed in 2017 at the U.S. Embassy in Canada with the title Northern Lights: 150 years of Canada-U.S. Relations. We adapted the original exhibition to highlight several of the people and events that have brought the U.S. and Canada together throughout our histories.

Among other people, organizations, and partnerships that have connected the U.S. and Canada, the exhibit explores the longstanding partnership between the Royal Canadian Mounted Police (RCMP) and the Federal Bureau of Investigation (FBI). To complement posters and photographs, original uniforms from the RCMP and the FBI are on display. You may not know that Canadian and American officials have worked together to tackle cases from the run-of-the-mill to sensitive counter-intelligence investigations since World War I. This collaboration continues to grow today, extending into efforts against terrorism, cyber-crime and transnational crime.

The exhibit even touches on our close relationship when it comes culture and sports. Anyone watching the NBA finals surely knows Canadian-American teacher James Naismith invented basketball in 1891, after he was asked to create an indoor game for his students during cold winters. The first game of basketball shortly followed, and the rest was history (Go Raptors!).

The exhibition is open from June 14th until August 30th, 2019. The Embassy’s art gallery is located at 501 Pennsylvania Avenue NW and is open to the public Monday to Friday, 9am-5pm, free of charge.