Hemispheric Partners: Trade, Technology, and Innovation Ties Between the Bay Area and Canada

The Bay Area Council Economic Institute released its newest report, Hemispheric Partners: Trade, Technology, and Innovation Ties Between the Bay Area and Canada, on April 17 in San Francisco. The report highlights the strong and growing economic connections between the Bay Area/Silicon Valley and Canada, which are helping fuel a vibrant cross-border exchange of talent, technology and capital.

As Canada works to diversify an economy that has been highly dependent on natural resources, the report finds that the country’s connections with California and the Bay Area have been instrumental in propelling its tech and innovation sectors. Report author Dr. Sean Randolph, Senior Director of the Bay Area Council Economic Institute, noted: “While the Bay Area serves as an important platform for Canadian citizens and companies to advance cutting edge technologies and grow new companies, Canada is doing all the right things to put in places the pieces necessary to become a strong partner and a global source of innovation in its own right.”

The study examines the very deliberate process by which Canada has invested heavily over the past 20 years in public education, science and technology research, to create a growing talent pool and a network of world-class research centers and tech clusters across the country. Canada ranks in the top 20 of countries on the Global Innovation Index, leads the world’s developed countries in its percentage of post-secondary degree graduates. It is also attracting growing venture investment, particularly from the Bay Area. The report finds that while Canada is home to just .5% of the world’s population, the country generates 4% of global knowledge. 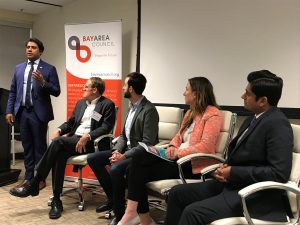 “Canada has a compelling story to tell in the Bay Area,” said Rana Sarkar, Consul General of Canada in San Francisco/ Silicon Valley. “We are linked by our economic ties, innovation, talent and values, and are working together to build things and tackle the challenges of the fourth industrial revolution.”

In addition to its focus on innovation and technology, the report offers a snapshot of Canada’s overall economy, its trade relationship with the U.S. and the other industries, particularly in natural resources, that define its economy. Specific topics include NAFTA and the US-Mexico Canada Trade Agreement (USMCA), implications of the US withdrawal from the Trans-Pacific Partnership (TPP), and Canada’s welcoming attitude toward immigrants.